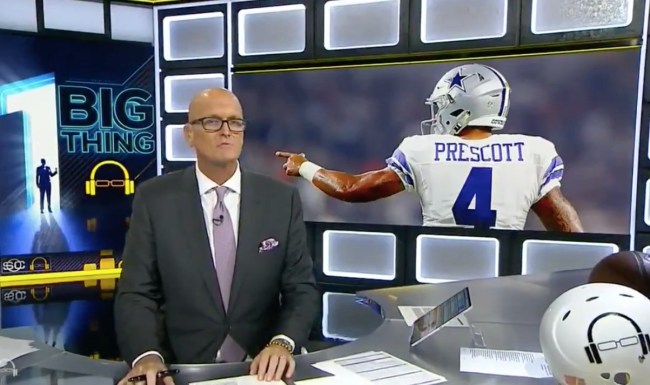 In case you were convinced that our reality actually ended long ago, I can promise you, we aren’t that lucky: our stupid little world is churning on as regularly scheduled as evidenced by Skip Bayless’ dumbass, once again, saying something completely out-of-pocket.

If you’d missed yesterday’s news, human garbage disposal Skip Bayless had an extraordinarily awful take about Dallas Cowboys quarterback Dak Prescott, who recently and bravely revealed that he struggled with depression following the suicide death of his brother.

In a truly shocking sequence of words, Bayless said “I have deep compassion for clinical depression, but when it comes to the quarterback of an NFL team, it’s the ultimate leadership position in sports.”

He then followed up that absolute trainwreck of a soundbite with an even dumber take, actually letting the following sentence dribble out of his crusty mouth: “You’re commanding a lot of young men and some older men. And they’re looking at you to be their CEO, to be in charge of the football team. Because of all that, I don’t have sympathy for him going public with saying ‘I got depressed’… he’s the QB of America’s team.”

For a man who’s made a career off of being a loud asshole, Skip’s opinion of Dak Prescott’s battle with depression truly marks a new low for the washed-up sportswriter.

Dak Prescott’s brother died in April of an apparent suicide.

Dak showed courage and bravery to maybe help someone who is afraid to speak up.

Skip Bayless has ZERO COMPASSION because Dak plays QB in the #NFL and showing weakness.

Bayless’ comments were so asinine that Fox Sports — and, let’s remember now, Fox is FAR from being a bastion of decency — put out an official statement to rebuke them:

“At FOX Sports, we are proud of Dak Prescott for publicly revealing his struggle with depression and mental health,” the statement reads. “No matter the cause of the struggles, FOX Sports believes Dak showed tremendous courage which is evident in both his leadership on the Dallas Cowboys and in his character off the field. We do not agree with Skip Bayless’ opinion on Undisputed this morning.”

Fox wasn’t the only sports media entity to buy Bayless in his place, though, as SportsCenter host and generally awesome human being Scott Van Pelt also took on the responsivity of dunking on Bayless’ idiot face and putting him in his place.

Scott Van Pelt puts @RealSkipBayless in his place…. without ever saying his name.

While Van Pelt’s takedown of Bayless may have been the most eloquent, it certainly wasn’t the most ruthless, as that wonderful distinction falls on Don La Greca of The Michael Kay Show, who called Bayless a “talentless hack” in his righteous dismantling of the hot-take-spewing-man-child.

Don La Greca of The Michael Kay Show has some thoughts on @RealSkipBayless.

• Talentless hack.
• Human trash.
• Not an ounce of talent or integrity.

I think he's being too kind. pic.twitter.com/RHbvy0krer

The sooner we get Skip Bayless off our airwaves, the better. Then again, because he works for Fox, I wouldn’t hold you breath.