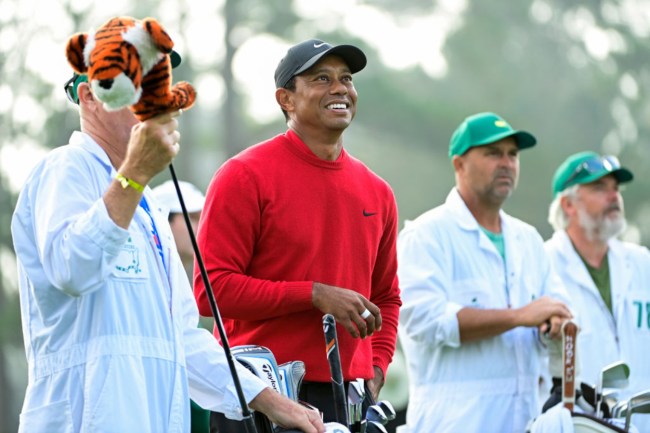 While it’s still unknown whether or not Tiger Woods elects to play in the 2022 Masters next week it’s become abundantly clear he’s doing everything in his power to give it a go. Despite his playing status being unknown now just 8 days from the opening round, it’s safe to say ESPN, CBS, and TV networks around the globe are scrambling in case he does decide to tee it up.

ESPN’s Scott Van Pelt alongside past major winners Andy North and Curtis Strange held a conference call on Wednesday morning and of course, Woods was one of the main talking points.

While none of the three planted their flag in the sand on Woods playing next week, they did have some interesting insight into how Woods’ presence changes the coverage strategy for the Masters.

SVP shared a hilarious story that put things into perspective.

I was texting with a player yesterday and joking that if Tiger plays you guys could play nude and no one would know you were there. And I’m kidding, obviously, but..”

Before Van Pelt could finish his sentence, Strange jumped in and said “no you’re not” before breaking into a laugh.

“I’m so excited Tiger is putting forth an effort. Is he going to play? We have no idea, but it looks like he’s testing himself, and that is a good thing. I commend him."

Van Pelt couldn’t help but smile – and you can’t blame him – while talking about the prospect of Woods defying all odds and possibly playing in next week’s major championship.

“It changes everything. He’s the singular player in the sport,” Van Pelt explained. “There’s people tracking his plane yesterday like it’s an SEC coaching search, and just the idea of him going up there and what’s going on and is he going to try, and if he plays, then that becomes its own lane of coverage.

“It’s Tiger. We all know what he is and what he represents, and if he’s going to try to play after what happened and the car accident — by the way, fellas, it’s not just him playing a tournament, it’s him playing the Masters Tournament. It would be quite something from a coverage standpoint.”

Woods reportedly arrived at Augusta National on Tuesday and played 18 holes alongside his son Charlie and Justin Thomas.