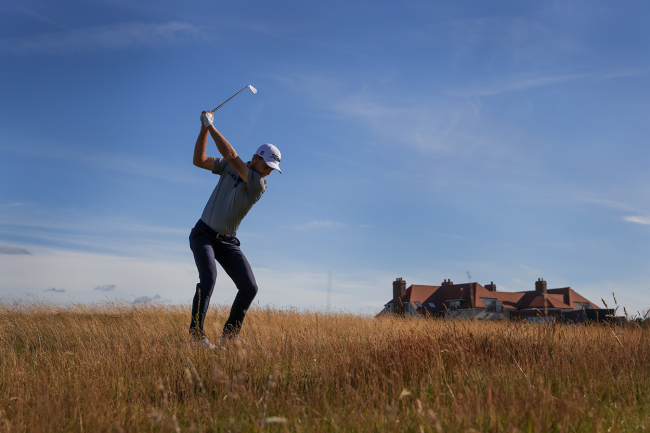 Will Zalatoris pulled off one of the most improbable chips that you will ever see on Thursday. Not because he sunk an incredible bunker shot to save par and not because he used the back slope to roll in an insane birdie.

Zalatoris’ chip was so remarkable not because of its consequences. Instead, it was truly something that you will probably never see again in golf. Like, ever.

With his fourth shot on the Par-5 16th at The Scottish Open, Zalatoris chipped from just off of the green. His shot rolled across the long, links green at The Renaissance Club in North Berwick and almost holed out.

However, the ball kissed the edge of the cup and did not go in. After rolling past the hole, it stopped perfectly on top of Matt Fitzpatrick’s poker chip-looking ball marker.

It didn’t hit it and bounce off. Zalatoris’ chip slowly rolled right on top of the marker and did not move. It was really bizarre and truly incredible, take a look:

What are the odds?!?@WillZalatoris' chip shot miraculously ended up right on @MattFitz94's ball marker 😲 pic.twitter.com/OUeFmBT4xW

The feat was so rare that Zalatoris’ group felt compelled to document the incredible positioning from up close.

To make things even better, Zalatoris sunk his putt and saved par. Fitzpatrick, who took his putt from the exact same spot, because Zalatoris’ ball landed on his marker, followed the same line and also made par.

That will probably never happen again on the PGA Tour. What are the odds?!