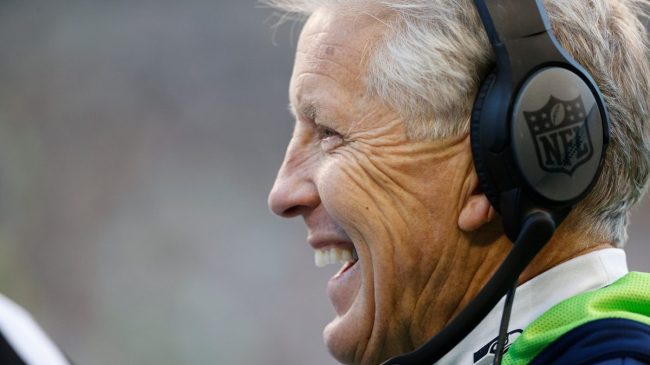 We’re all very well aware of the Seattle Seahawks’ “12th Man” mantra by now. The fans typically show out as they’re one of the toughest teams to play against at home. However, it appears the team took that slogan a bit too literally on Sunday after picking off Las Vegas Raiders quarterback Derek Carr.

Sanjit T. shares the clip revealing the play that transpired early in the first quarter. After Derek Carr throws the ball, look down at the bottom of the screen. You’ll see number 52 (Darrell Taylor) of the Seahawks highlighted by a red box. Watch him closely, as he clearly enters the field of play and starts blocking for his teammate after the interception.

After Derek Carr’s first Interception, a 12th player from the Seahawks bench ran onto the field and started blocking 😂 pic.twitter.com/x4CDDSfdlI

How in the world did the referees not see this? That’s a rhetorical question by the way. NFL refs are basically blind, so it can’t be that surprising for the Seahawks to get away with a 12th man on the field. With that said, the real question that needs to be asked is, what was number Darrell Taylor thinking?

The second-year defensive end likely just got so excited his natural instincts kicked in. That has to be the explanation, right? Or, maybe this was a sneaky move Pete Caroll implemented with the guys on the sideline. Either way, the Seahawks got away with one. The Raiders are just lucky Derek Carr’s interception wasn’t taken to the house.