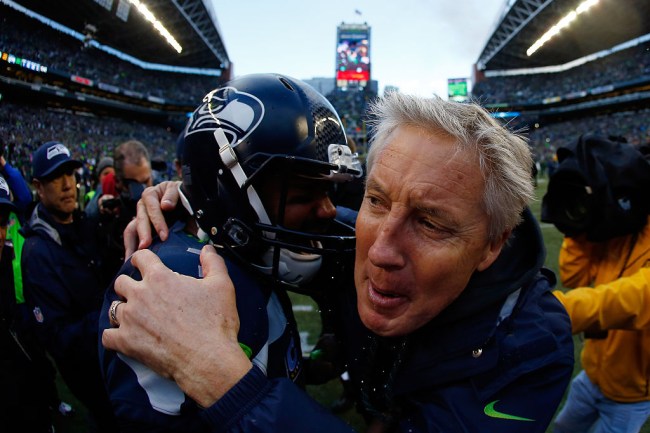 In an extensive profile of the dramatic fall of the once dominant Seattle Seahawks, Sports Illustrated’s Greg Bishop and Robert Klemko collect opinions and anecdotes from the Legion of Boom and others central figures on the team that won a Super Bowl and pooped away another to pin down why a potential dynasty corroded.

The central theme throughout the piece is the resentment many players harbored toward Russell Wilson for being thin-skinned, distant, and worst, coddled by head coach Pete Carroll to an absurd extent. This didn’t bode well for a transcendent defense who thrived off competition and tough love. The Seahawks only have five players remaining from their championship team and the rift is said to have started after a random practice in 2014 when Richard Sherman intercepted a Wilson pass and the two exchanged words before Sherman told his QB, “you fucking suck.”

Carroll then reportedly gathered his offensive and defensive leaders and told them they needed to protect Wilson, treat him more gently than other teammates.

“He protected him,” one Seahawk says. “And we hated that. Any time he f—– up, Pete would never say anything. Not in a team meeting, not publicly, never. If Russ had a terrible game, he would always talk about how resilient he was. We’re like, what the f— are you talking about?”

This drama was festering even before Wilson threw an interception at the goal line to lose Super Bowl XLIX. Things had gotten so sour in the Seahawks locker room that some believed Carroll called the play because he wanted Wilson to win Super Bowl MVP instead of Marshawn Lynch:

That Wilson threw an interception mattered less than the fact that the Seahawks had called a pass play on second down. Many who lamented how Wilson was treated differently now believed, truly believed, that Carroll had called a pass play to give Wilson a better chance to win the Super Bowl MVP award and decrease Marshawn Lynch’s chances, perhaps conveniently ignoring that offensive coordinator Darrell Bevell might have actually called the play. Regardless, the players say, that call contradicted what Carroll always said publicly: that he wanted to run the ball and play great defense, that that’s how he built the Seahawks—to be tough and stop foes and let Lynch bulldoze Seattle to victory after victory. Again, several players felt that Carroll said one thing and did another, and this time it had cost them a repeat Super Bowl title. (Such a view disregards the fact that the Seahawks defense missed 18 tackles and allowed the Patriots 196 yards-after-catch in the game.)

This is a wild theory to even assume but the mere fact that some Seahawks legitimately believed this to be plausible should shine an ugly light into how fractured the locker room was.

Some Seahawks still remember every detail from that night. Sherman pacing back and forth, wearing his frustration into the carpet in that locker room in Arizona. Lynch, fully dressed, downing a bottle of cognac, saying “These motherf——— robbed me,” and “f—- this,” over and over. “If we gave the ball to the soul of our team and we lose, f—- it, we lose,” one Seahawk says. “Point-blank, period. You lost doing what you do best. But he gave it to Russ. I didn’t believe the MVP thing at first. But now I wonder. It’s at least plausible.”

“That one play changed the whole locker room,” McDaniel says. “When Pete would give a speech or try for a heart-to-heart, people just stopped responding. They didn’t know who to trust anymore.”

Wild. Check out the whole piece over at Sports Illustrated. Definitely worth the read if you’ve got 10 minutes.