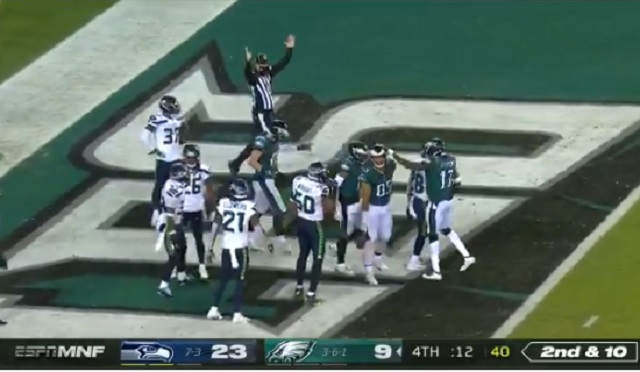 Monday Night’s Seahawks-Eagles game produced one of the worst bad beats of all-time.

Before the game, Vegas had the Seahawks at -6.5 points which seemed like a good bet at the time.

Unfortunately for those who bet on the Seahawks, Eagles QB Carson Wentz converted an insane garbage time hail mary TD to make the game 15-23 with 12 seconds left.

The Eagles then went on to convert the two-point conversion to complete the backdoor cover.

Well, that was significant to some. #Eagles (+6.5) convert the two-point conversion to make it a six point game at the end of the game against #Seahawks. pic.twitter.com/PAz8DXXhkc

According to Bleacher Report, 91 percent of those who bet on the game put their money on the Seahawks and ended up losing because the Eagles hail mary.

91% of bets were on Seattle (-6.5) to cover tonight and somehow due to a hail mary, Philly covers.

Gamblers were obviously sick with the result.

🥴 guess who was part of the majority. https://t.co/C98Yd6vDTk

This was a first ballot hall of fame bad beat 🥴 https://t.co/2YI2jb3tdK

I’m going to have nightmares for years over this https://t.co/XyvBUEp3Mo