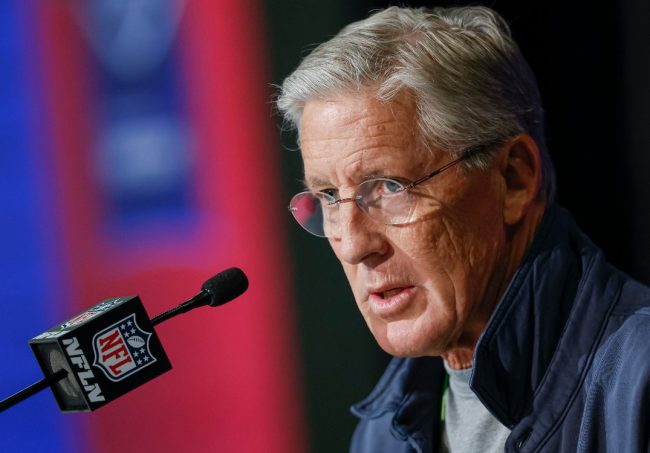 The Seattle Seahawks are in a peculiar situation right now after trading Russell Wilson to the Denver Broncos. Geno Smith and Drew Lock are in a heated quarterback battle as reports are saying it’s extremely close. However, head coach Pete Carroll made a statement about the two quarterbacks that might have Seahawks fans rolling their eyes.

Pete Carroll Seems Too Confident In The Seahawks QB Competition

According to Greg Ball, Carroll claims Seattle “may have two number ones.” That’s an extremely bold take considering both Smith and Lock would be backups for most other teams. The Seahawks are in a position where they have to play one of these two, which doesn’t bode well for their chances this season.

Pete Carroll on the QB competition between Geno Smith and Drew Lock:

"We may have two numbers ones."

Of course, Carroll may just be optimistic about the situation, as it’s not like he’s going to trash talk his players. Despite that, the quarterback position is a key issue for Seattle right now as it will likely hinder their season. Geno Smith has been the slight favorite throughout the preseason, but Drew Lock is close on his heels. They’re not number ones at all, but they each have an opportunity to prove themselves in the Seahawks’ offense this year.

We’ll see how it plays out. There is always a chance the front office acquires another quarterback for the team. With the San Francisco 49ers rumored to release Jimmy Garoppolo, perhaps the Seahawks can swoop in and add the veteran quarterback. If that’s the case, then Seattle could actually be a bit more competitive than now.