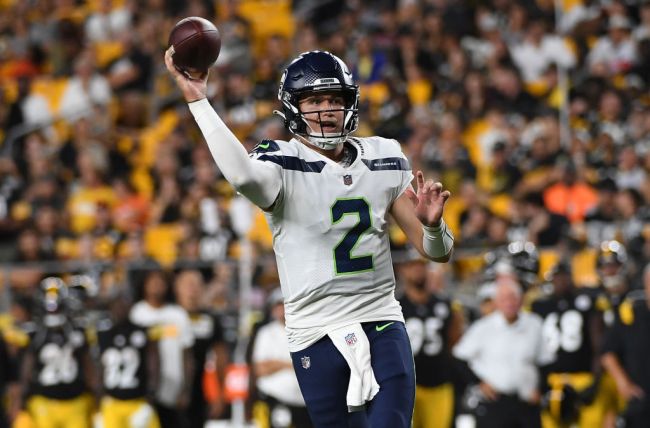 The Seattle Seahawks’ quarterback competition has had a major change at practice today following the team’s first preseason game.

Geno Smith had been clearly leading the battle, getting most of the team’s reps as the QB1 and drawing praise from coaches on the staff. Now it appears that it is Drew Lock’s turn to get his shot at the team’s QB1 reps.

According to Seahawks beat writer Gregg Bell, Drew Lock was the QB1 at camp today for the Seahawks.

Seattle Seahawks head coach Pete Carroll has confirmed that Lock will be starting for the team in their Week 2 matchup as well.

Carroll also said that this was the plan all along.

We had planned well back into the offseason to get to this game, the second game,” Carroll told reporters. “Geno would get the start in the opening game and we’d go with Drew in the second game.

This makes plenty of sense as there wasn’t anything from this weekend’s game that indicated there would be a change in the QB depth chart. Geno Smith started the game and completed 10 of 15 passes for 101 yards and ran for 9 yards and touchdown. Meanwhile, Drew Lock played the rest of the game, 11 of 15 pass attempts for 102 yards and a pair of touchdowns.

Carroll also acknowledged that Smith is still the number 1 guy in the QB competition.

However, Lock will get his chance to change that on Thursday against the Bear as he leads the first-team offense into action. If he can put in another solid performance then he could give the Seahawks a lot to think about as they head into Week 3 of the preseason.