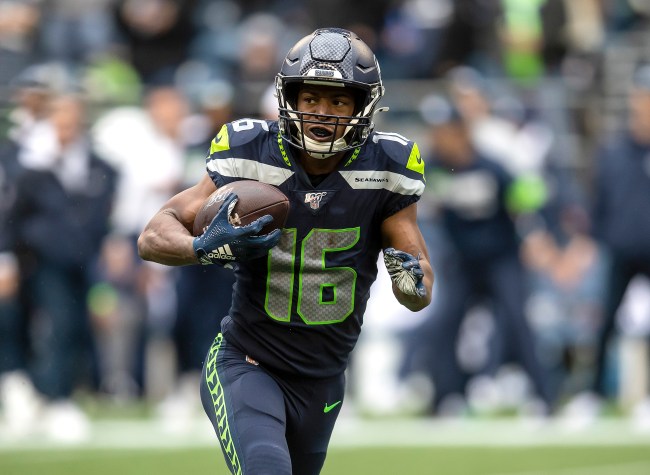 Seahawks’ Tyler Lockett has been balling out this year and his emerged as a top tier wide receiver in the league but has a unique story to tell off-the-field.

In a podcast with ESPN’s Adam Schefter, the 27-year-old wide receiver, who is releasing a book of poetry later this month,talked about how he’s still a virgin and how he’s saving himself for marriage.

Here, @TDLockett12 discusses his new poetry book “Reflections”, his mental health and his virginity. It is the shortest, deepest talk with a player in a long time. https://t.co/3GjlIuyZAe pic.twitter.com/KBwPTewL0n

“I have a girlfriend and she understands what I’m about and loves God as well,” . “She’s cool with being able to wait until marriage. So, for me, as long as somebody understands what they’re getting into and respects it, that’s all that matters.”

Back in 2017 Lockett talked about his decision to avoid sex and how he fights temptation.

“I just don’t struggle in the area of having sex because I haven’t had sex before so obviously I’m not going to struggle,”. “If a girl comes at me or whatever, I just tell her no. Have I been in situations where I could have did stuff? Yeah, plenty of times. I know how to stop. I have great self-control.”

Tyler’s poetry book “Reflection”, which is set to be released on October 15th, is a collection of life experiences told in a way to help others going through tough times in their own lives.

“It really means a lot to me because I’ve found out that the best way to be able to help somebody is just to talk about yourself,’’ he said. “And one of the things I have in there in my introduction is if you talk about somebody else’s scars they feel like they are the victim and feel like you are coming at them but if you talk about yourself and you share your own scars they will listen more and the conversation becomes more transparent.’’
”

Tyler seems like a good dude and if he continues making catches like the ones shown below it doesn’t matter if he’s having sex or not.

WHAT A THROW BY RUSSELL WILSON AND CATCH BY TYLER LOCKETT!!!!! pic.twitter.com/lpmhSUsMXR