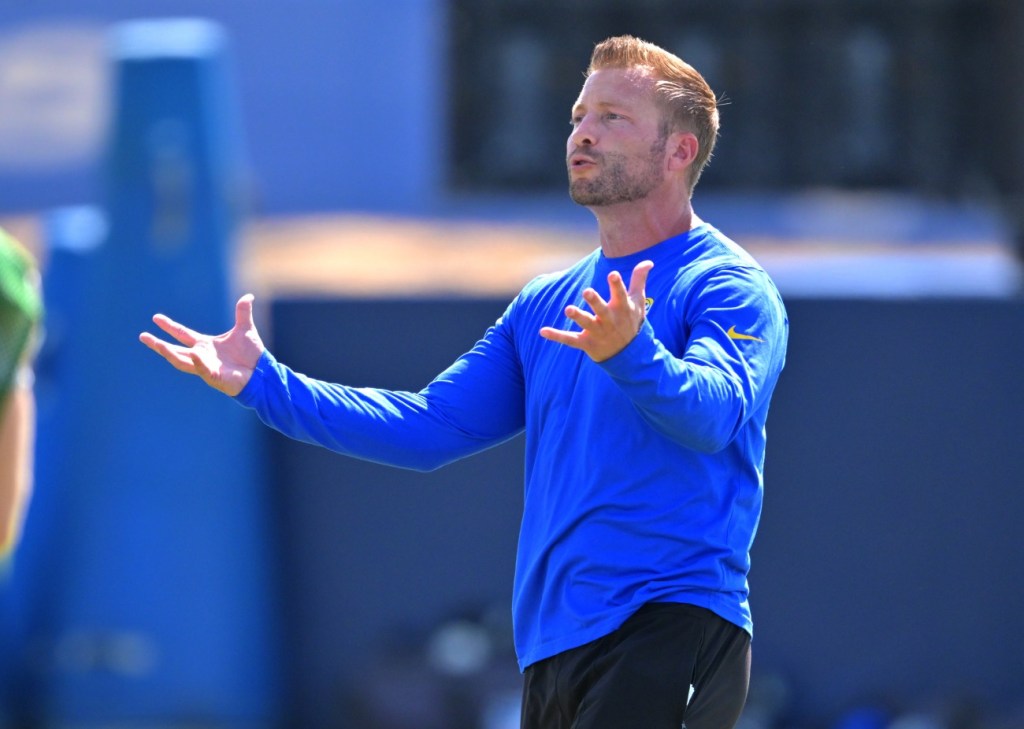 Looking back at the Los Angeles Rams-Detroit Lions trade swap for Jared Goff and Matthew Stafford it’s just as surreal now as it was then. Rams head coach Sean McVay went on vacation to Cabo and came back with the team’s new quarterback?! I can’t recall similar trade ever happening in the NFL before or since.

The trade clearly worked out in favor of Sean McVay and the Rams. They are the reigning Super Bowl champions after just one season with Matthew Stafford. But Rams head coach Sean McVay does have some regrets about the trade. Specifically, with how it went down and what he was/wasn’t able to do.

Sean McVay spoke with Open Mike host Mike Silver about his biggest regret over the Goff trade and what he’d do differently if he could. I’ve included the video below along with a transcript of their quotes if you’d rather read than watch a video.

Mike Silver: “You know I’m close with Jared Goff, I’m close with you. I know you and Jared talked after the trade and really went through a lot of stuff. Looking back at that experience, are you hard on yourself? Would you have done things any differently just in terms of how it ended?”

Sean McVay: “Yeah I think, uh, that was a hard thing for me because the thing that’s more important than anything is being a good communicator. Clear, open, and honest. Making sure people aren’t caught off guard. And really having respect for the players and the coaches and what they have to do.

And, I wish that there had been better in-person communication. I think you and I had talked about this… Number one, and I know you know this, you’re very supportive of Jared, you guys are really close and well I’ve been supportive of Jared.

But I think the one thing that hurt me, that I know you know, is that I would never want anything to be misunderstood about my appreciation and my respect for Jared. Was it a tough decision? Yes. Were there some things that I could’ve handled better in terms of the clarity provided for him? No doubt.”

Sean McVay: “If I had it over again what I would do is before I’d even gone to Cabo when there was a possibility of ‘if Matthew Stafford is available or if there’s other quarterbacks available, that would be something that we would explore.’ You sit down with him, you look him in the eye, (and) you tell him that instead of calling him and setting up a meeting where that was my intention when I got back from Cabo.

However I cut it, whatever I’m going to say from here on out is an excuse but my intentions were to be able to sit down with Jared. I never thought things would accelerate as quickly as they did… To be able to look him in the eye and let him know what was going on.

When it got public that we were interested in Matthew, what we thought was going to be a week’s worth of time ended up happening in about 24 to 36 hours.

So, all in all, biggest thing I regret is (not) being able to sit down and look him in the eye and be able to communicate kind of where we are, what we were going to try to do moving forward. And for that, I regret it. I will not make those same mistakes again but I care about Jared and he sure as hell did a lot of good things.”

If you’ve got time, that is the full 42-minute interview between Sean McVay and Mike Silver which is up on The Volume‘s YouTube channel.