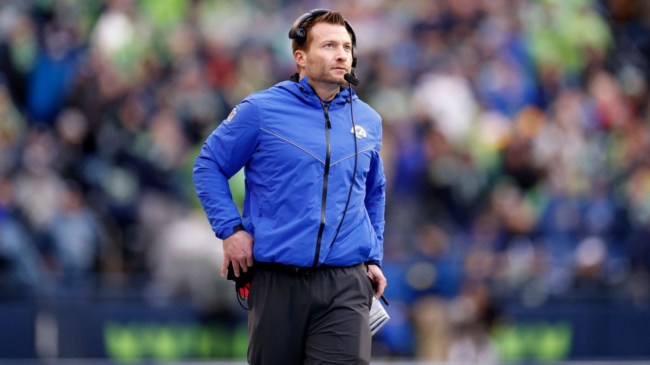 There may not be a coach in the NFL right now whose future has been the subject of more speculation than Sean McVay’s.

There have been good reasons for that.

After the Los Angeles Rams won the Super Bowl last season, rumors began swirl about McVay potentially leaving coaching to accept a job as a broadcaster. There were even reports that he had received a large offer from one company.

He ended up deciding to stick around with the Rams to run i back with much of the roster he had just won a Super Bowl with intact.

Unfortunately, things didn’t work out nearly as well when they tried to defend their title.

The Rams struggled badly on offense this season before injuries began to take their toll in the second half of the season. In the end, they only managed to earn 5 wins this year.

With the team struggling and lacking the draft picks and cap space they would likely need to make big changes, Fans began to wonder if this might be the year McVay leaves.

By the end of the season, his coaches had already begun leaving for other jobs and he had reportedly told his whole coaching staff that they could begin looking into other opportunities.

Despite all of that, ESPN’s Dianna Russini reported today that Sean McVay will be returning as the head coach of the Los Angeles Rams next season.

Sean McVay informed members of the Rams organization that he will be staying on as the head coach, per sources.

McVay will have his work cut out for him as he attempts to get the Rams back on track after a terrible season.

For now, the Los Angeles Rams organization and its fans will just be happy that finding a new coach won’t be another issue they have to deal with this offseason.