Odell Beckham Jr. Crashed Sean McVay’s Wedding And The Coach Handled It Like A Champ 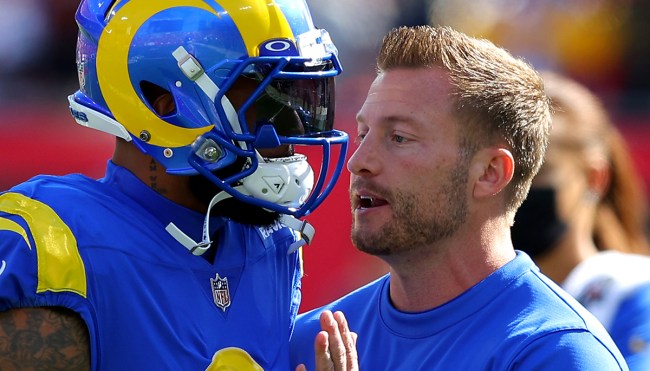 If you’ve ever had the pleasure of knowing someone who genuinely believes a “birthday week” is a thing, then you’re likely all too familiar with the insufferable nature of people at the center of occasions worth celebrating who insist on making every single aspect entirely about themself.

However, I do think that attitude is fairly justified when it comes to your wedding day. You obviously want to avoid going Full Bridezilla, but when you’re at the center of a (hopefully) once-in-a-lifetime event that usually requires months of planning and more money than you were planning on spending, you’re allowed to be somewhat tyrannical when it comes to making sure everything goes as hoped.

Despite what Vince Vaugh and Owen Wilson led millions of people to believe, most couples tend to frown upon wedding crashing. However, that hasn’t stopped plenty of transgressors from engaging in the act—including people like Katy Perry, the widely beloved Tom Hanks, and other celebrities who’ve unexpectedly inserted themselves into the nuptials of random people.

It turns out Sean McVay also had a high-profile wedding crasher at the massive bash he recently threw after tying the knot with Veronika Khomyn. The guest list was unsurprisingly packed with plenty of big names and boasted more than a few members of the Los Angeles Rams, including Aaron Donald, Matthew Stafford, and Cooper Kupp.

According to TMZ, McVay had to be fairly selective when it came to picking which players got the invite, and said the most “stressful” aspect of the planning process was determining who made the cut for the final guest list. According to a story he shared on I Am Athlete, he was ultimately forced to exclude Odell Beckham Jr.—but that didn’t stop the wide receiver from showing up anyway.

Thankfully, as McVay recounted, it all worked out in the end:

“So, I just invited the captains from last year’s team and then there was a couple of other guys that are retired players that you still have great relationships with.

Odell and I had a great relationship. I mean, I love Odell. Only in Odell’s fashion could he be the wedding crasher at our wedding. So, O showed up, crashed the wedding and I loved it that he was still there.”

McVay said he also joked Beckham had to repay him for crashing the wedding by signing a new contract with the franchise (the team doctor also warned the wideout to take it easy on the dance floor as he continues to recover from the knee injury that knocked him out of Super Bowl LVI).

my wedding – you re-sign with the Rams, then, man!” McVay continues to be pretty public about wanting him back. “We would love to have Odell back…if he’s ready to go do this thing again, nobody would be more excited than me to have him back with us.”

It doesn’t get much more Odell than that.