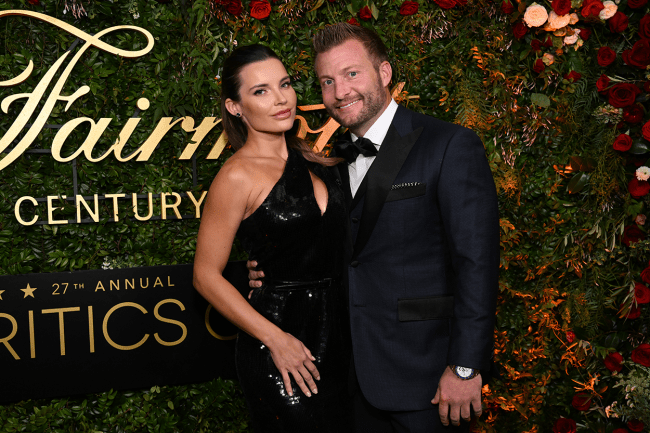 Sean McVay is officially a married man. The 36-year-old head coach of the Los Angeles Rams married his longtime girlfriend Veronika Khomyn over the weekend and their wedding looked (and sounded) rather lavish.

NFL Network’s Peter Schrager, who is not only “the man,” but also McVay’s good friend shared details from the incredible day on Good Morning Football. He said that it was something of a ‘who’s who’ for the football community.

“It was cool to see all the people in Sean’s coaching life come out and fly in from all these different places,” Schrager said.

The wedding ceremony itself was gorgeous and both McVay and the former Ms. Khomyn looked incredible, of course.

And then the party got started with the first dance.

From there, it was defensive coordinator Raheem Morris who kicked things off.

“This is the most charismatic man in football,” Schrager said. “When I tell you this man walked in the room and the entire players section to the coaches section was like, ‘Ahh,’ Raheem Morris is the winner. We got on the dance floor and Raheem got everyone off their feet and was like, ‘No, we are going to dance. We are not going to sit in the hallway and talk about a 9 route.’ Rah brought it. He’s the best.”

At one point during the evening, McVay and his bride made their way on stage at which point the head coach rapped every word to Tupac’s California Love. It was lit.

And then, after a quick jacket change, McVay went face-first into his Lombardi Trophy wedding cake. It was the ultimate flex.

Ultimate flex: Sean McVay had a Lombardi Trophy cake at his wedding (via trentkoch/IG)

Food wise, Schrager said that the spread was top-shelf. He said that it started off “with a nice sushi spread when you first get there, and I’m not talking about sushi you get at the Port Authority bus terminal.”

“I’m talking about some of the finest sushi I’ve ever seen. Sushi that might’ve been wrapped straight from the Pacific Ocean,” he said.

There was also delicious burrata and fish or steak for dinner. Here is Schrager’s full recount of the night:

The NFL event of the weekend was the McVay wedding in LA.@PSchrags was there and gives us his full recap, including shout-outs to "Dante from the Miami of Ohio crew", a dance floor king, and the catering crew for the sushi setup.

Congrats to Coach and Veronika! pic.twitter.com/bfhmO8vji2

Of course, the new Mr. and Mrs. McVay were always going to go big. But based on Schrager’s details, it sounded like it couldn’t have been more perfect!