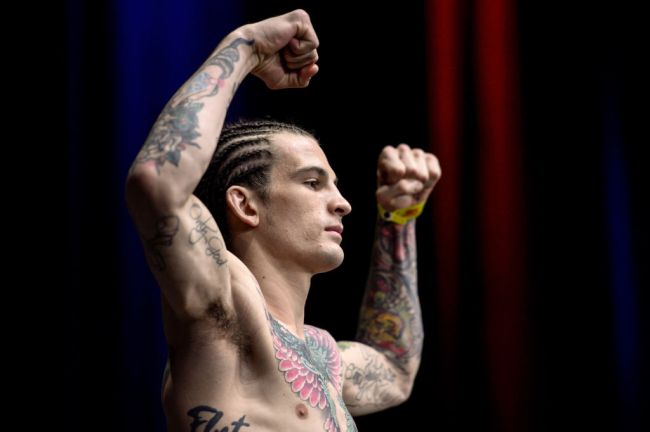 Sean O’Malley has the toughest test of his career coming up in October.

At UFC 280, O’Malley will be taking on former UFC Bantamweight Champion, Petr Yan.

Yesterday, O’Malley released a wild training video that shows him riding an exercise bike with a punching bag hanging over it, throwing uppercuts at the bag with one hand in a boxing glove and the other holding a dumbbell, all while smoking a joint,

Maybe O’Malley is trying to take a page out of the Diaz brothers’ playbook for his upcoming fight. The UFC’s most well-known siblings have actually put in some of the best performances of their careers when smoking in close proximity to their fights.

Nate smoked a joint at his open workout the week of his fight against Anthony Pettis and then proceeded to win a dominant unanimous decision.

Nick Diaz once competed in one of the greatest fights in MMA history, defeating Takanori Gomi in Pride, and after the fights, his drug test came so back far above the threshold for a failed test that the commissioner of the Nevada State Athletic Commission believed it had numbed Diaz to the pain of Gomi’s strikes.

That could be exactly what O’Malley needs for his fight against Yan. While Yan is coming off of a loss, but that loss was a close decision against a grappler. His most recent fights against opponents who weren’t interested in taking the fight to the mat saw him take a clear decision against Cory Sandhagen and finish Jose Aldo.

O’Malley has also recently proven he’s no slouch in the striking department. He had finished 3 consecutive opponents before his fight against Pedro Munhoz that ended in a no contest. O’Malley seemed to be gaining momentum in the second round of that fight and could have been on his way to winning a decision.

Still, with what we’ve seen from Yan in fights against other strikers, Sean O’Malley might not hate the possibility of a little bit of numbness to Yan’s strikes.