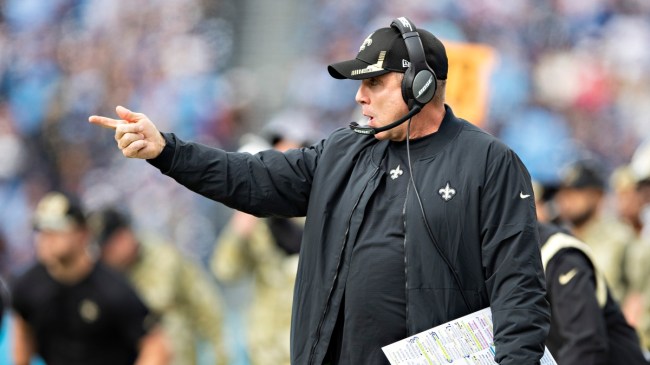 Sean Payton is a hot name in the head coaching market right now as he’s hinted at wanting to return to football at some point. For now, everything is simply a rumor.

Even so, there is still the chance he returns as an analyst in 2023. With that said, Payton provides his chances of doing so.

Michael Strahan asked Sean Payton point blank, “1-10, what are the chances you’ll be here next year with us (at Fox)?” With no hesitation, Payton says “7.” This is pretty intriguing, considering the Denver Broncos reportedly are already in communication with the New Orleans Saints. Watch the full clip below.

That second question comes out of nowhere, doesn’t it? Anyway, “Snack Bar” has plenty of options on the table. Obviously, the Broncos have expressed the most interest. However, Las Vegas is saying the Arizona Cardinals are the favorite to land Sean Payton.

Meanwhile, rumors are afloat that Sean Payton is interested in coaching the Los Angeles Chargers. Additionally, the fanbase is all for Payton taking over as the head coach in LA. Especially when you consider the idea of him coaching Justin Herbert. That could prove to be an incredibly successful tandem.

Don’t forget the possibility of the Dallas Cowboys being in play either. Although, those chances might be dwindling after Jerry Jones’ latest comments.

It will be interesting to see how this all plays out with all of these rumors swirling. Perhaps Sean Payton likes his chances of returning to Fox because he’s waiting it out for a specific job. Which job that is, is currently unknown. Either way, Payton’s name is going to be attached to multiple head coaching positions in the NFL throughout the offseason.