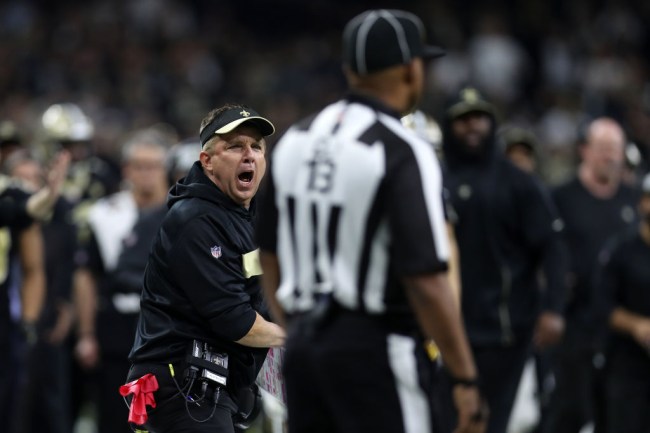 During last year’s NFC Championship Game, the Saints got royally screwed after officials declined to throw a flag on one of the most blatant pass interference penalties these eyes have ever seen—a no-call that all but forced the NFL to institute a new rule that would allow coaches to throw the challenge flag when they feel they’ve been wronged on a similar infraction.

However, it’s safe to say the rollout hasn’t exactly gone smoothly, as fans started criticizing the new policy as soon as the preseason started and referees have shown an impressive unwillingness to reverse calls upon review despite how obvious they may be to even the most uninformed observer.

However, in a cruel twist of fate, the Panthers managed to successfully challenge a no-call during their game against New Orleans on Sunday.

Overturning a pass interference call against the Saints in the Super Dome is the bravest thing the refs have done all season pic.twitter.com/uLYnHqsfRQ

While the reversal didn’t have an impact on the outcome of the contest, Sean Payton wasn’t exactly thrilled about it and ripped into Al Riveron, who is responsible for overseeing the challenges from the NFL’s office in New York City:

“It wasn’t our best game. It wasn’t their best game, and quite honestly, it wasn’t New York’s best game.

So it is what it is. I’m not going to get into it on the replay relative to the fouls, the changes that took place in the offseason, but sitting in on every one of those meetings, I don’t know that it’s exactly what we discussed where we are today with it. In fact, I’m pretty sure it’s not. But we’ve got to be able to adjust to it.”

On Monday, Payton floated an idea to help remedy the issue, as ESPN reports he believes the NFL should form a three-person panel to review pass interference calls instead of leaving the decision in the hands of a single person.

Sure, it might not solve the problem entirely, but when you consider how useless the current system seems to be, it’s certainly worth a try.