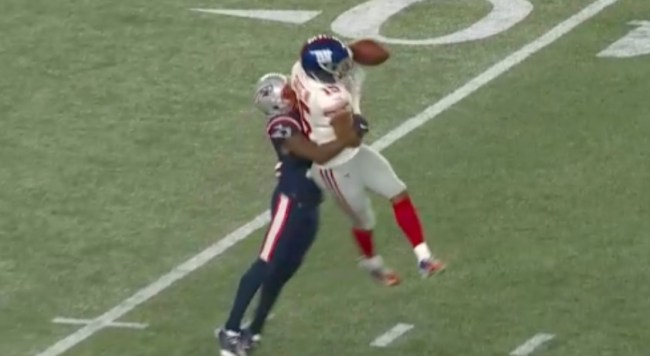 After the New Orleans Saints were robbed of a chance to go to the Super Bowl because NFL refs missed an obvious pass interference penalty at a crucial point in the NFC championship game, the NFL decided to implement a new pass interference replay review system to prevent such an egregious error from happening in the future.

The new replay system gives coaches the ability to challenge offensive and defensive pass interference penalties in the first 28 minutes of each half, with the final two minutes subject to booth review.

Watch as Pats’ Jonathan Jones clearly grabs Giants WR Golden Tate by the arm and was not called for a pass interference penalty on the play.

#NFL officials have gone rogue. 100-percent. This wasn’t called on the field and then wasn’t changed after it was flagged by the #Giants. So they ruled TWICE that this wasn’t defensive pass interference. Which is just blatantly wrong and a purposeful refusal to change the call. pic.twitter.com/BY2rRE6gQc

If that isn’t pass interference, why even have replay on them?

NFL pass interference review policy exists for one reason: to give off the appearance that the league addressed the Rams-Saints debacle last season.

We're now to the point where the non-application of the new policy is worse than what prompted it in the first pace.

If you asked 100 referees if that was defensive pass interference, without telling them whether it was called or not, I’m not convinced a single one would say no. Only thing more annoying than adding more rules is not enforcing clear violations of them.

This was NOT overturned and called pass interference after the #Giants challenged it
Tate was also held earlier in the route, but that's not the point.
If the #NFL is not going to overturn this, what is the point of the new PI challenge? Is it really ONLY to avoid another LAR-NO? https://t.co/c8mM3ntg8i

The NFL is going to have to address this insanity sooner than later.