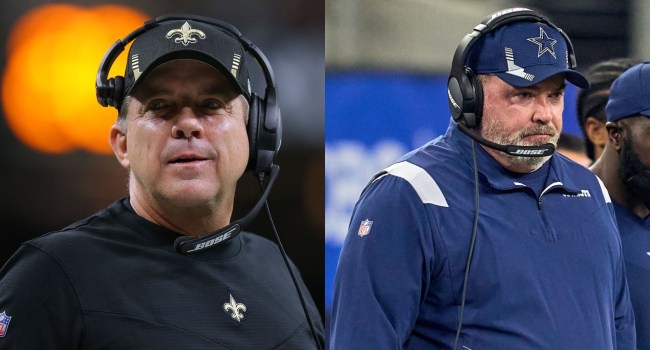 Earlier this week, longtime Super Bowl-winning New Orleans Saints head coach Sean Payton informed the organization that he would be “stepping away” from the role.

While Payton may be walking away from the Saints for the 2022-23 season, no one in the football world seems to believe that the 58-year-old, widely considered to be one of the best coaches in the league, is walking away from coaching for good.

Despite walking away from the Saints, Payton already finds himself back in the football spotlight, as he recently appeared on The Dan Patrick Show to not only discuss his decision and his future but to discuss the shortcomings of — you guessed it! — the Dallas Cowboys, a team he’s been linked with for over a decade.

“Then ask me about the end of the Cowboys game, and let me see if I can do this better,” Payton said to Dan Patrick, who then asked: “What did the Cowboys do wrong in the situation?”

“Well, look, they’re trying to get in touchdown range, and they ran a draw,” Payton said. “We would typically throw a pass and down, down. Ultimately, I think two more steps for Dak. He’s got to slide a little quicker. He’s up, and the ball has to go to the umpire. And then, let’s go. We can never hand the ball to the center.” [via The Dan Patrick Show]

.@SeanPayton shares how he would've explained a couple key moments from playoff games this season if he were in the broadcast booth. #NFL

While it’s been confirmed this week that both head coach Mike McCarthy and defensive coordinator Dan Quinn will be returning to the Dallas Cowboys next season, they’ll likely spend the entire year living with the pressure of Sean Payton lurking in the background.