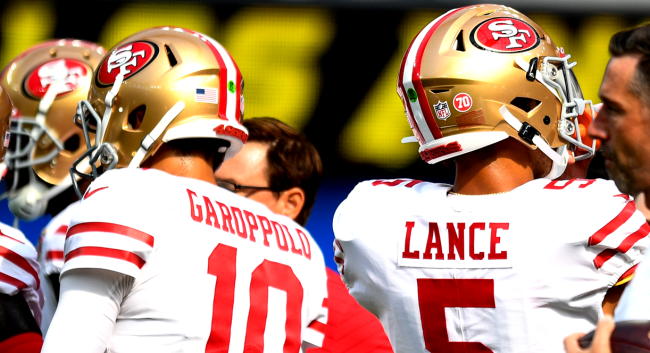 After looking less than stellar in his first start since taking over for Jimmy Garoppolo in San Francisco, Trey Lance sparked some concern among many 49ers fans.

During the game, the second-year quarterback out of North Dakota State completed less than 50 percent of his passes for just 164 yards, averaging just 5.9 yards per pass, threw an interception, and ended the game with a 50.3 QB rating. On the plus side, Lance did lead the team in rushes with 13 for 54 yards.

On Monday, during his appearance on The Herd with Colin Cowherd, former NFL head coach Sean Payton shared a hot take regarding Trey Lance and the quarterback situation in San Francisco.

After saying he had some concerns about Trey Lance’s accuracy, Payton replied to Cowherd, “Yeah, it can improve some. I said this yesterday, I think there are seven or eight teams that we’re gonna see, not because of injury, we’re gonna see more than one quarterback play. I think, and I believe, don’t kid yourself, that we’re gonna see Garoppolo back in that lineup.”

Payton went on to explain, “So here’s the pickle if you’re John [Lynch] and if you’re Kyle [Shanahan]. You drafted this kid so high and man, it’s hard to sell to the the guy upstairs writing the check that well, our little binky, our blanket, is Garoppolo, right? But we’re going to start this guy. We’re committed to starting him, but at some point, we’re not having the rest of the roster sitting there ready to win.”

He did admit that the weather in Chicago was pretty brutal, which surely contributed to Trey Lance’s poor performance, but his point was made.

After 99 attempted passes in his NFL career (a rather small sample size), Lance has now completed just 54.5 percent of his passes.

On the flip side of the coin, former 49ers great Jerry Rice said during his weekly interview on 95.7 The Game, “Hold up, man. It’s the first game of the season, guys. Come on, now. I understand competition. There ain’t nothing wrong with competition. I think Trey, he has the maturity where he’s going to deal with this. He knows that this is his team, and it’s up to him to lose the [starting] quarterback position.

“I think he’s only going to get better. Look at some of the throws he made to Brandon Aiyuk and some of the other receivers, guys. We need to dial [the quarterback debate] back just a little bit.”

He also pointed out that Lance was without George Kittle on Sunday and he can’t be faulted for Deebo Samuel’s fumble.

Still, Lance started a grand total of just 17 games in three years at North Dakota State (the same school Carson Wentz played for in college). His numbers in those 17 games were crazy gaudy (30 touchdown passes to just one interception, plus 18 more TDs on the ground), but since 2018 he has thrown just 417 passes total in a actual game.

Little wonder NFL analyst and former NFL quarterback Chris Simms said back in May that the 49ers were “scared” to start Lance.

They really don’t know what they’re going to get. Thus the concern being felt by many 49ers fans.