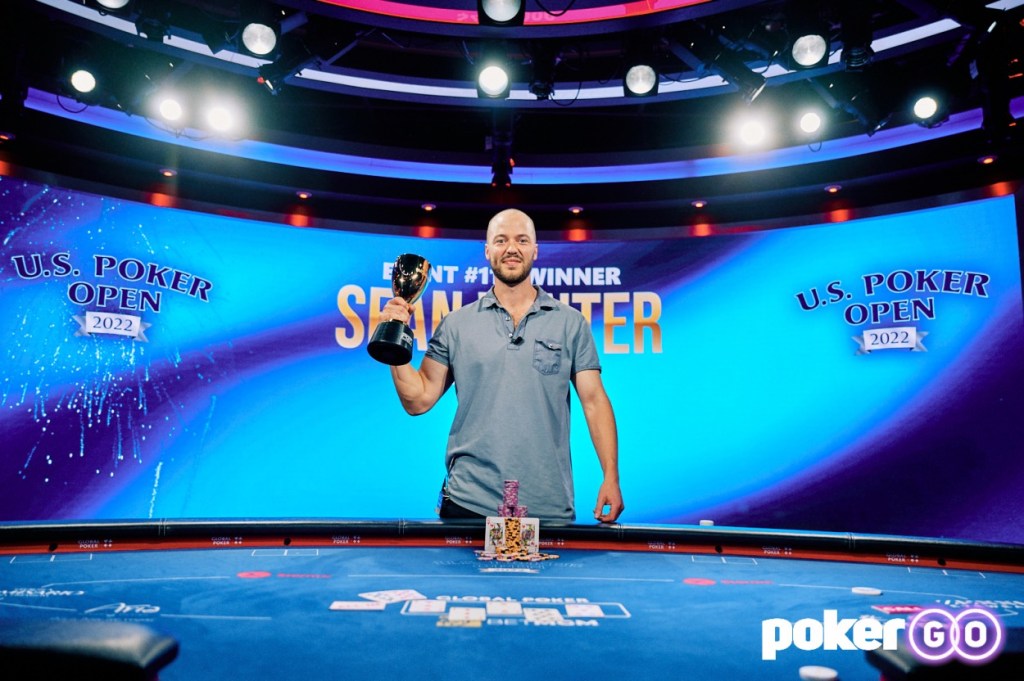 The 2022 US Poker Open features 12 events with buy-ins ranging from $10,000 up to $50,000 for event #12. There have been some legitimately wild moments this year’s US Poker Open, not the least of which was the legendary Phil Hellmuth shoving all-in and winning with Qd4H against Alex Foxen’s 9s9d.

I have footage of that Phil Hellmuth hand below. That hand went borderline viral with people making memes about Q-4 offsuit and the entire poker world discussing Hellmuth, the greatest tournament poker player in history, playing that hand. But first, we need to take a look at what PokerGo is calling the Bluff of the Year.

This all-in bluff from Sean Winter took place during event #11 of the 2022 US Poker Open, a $25,000 No-Limit Hold’em event. This isn’t the final hand of the tournament. At this point, there are still three players in the tourney including Sean Winter, Ali Imsirovic, and Jake Schindler. But this hand features the two players that would go on to knock out Schindler and play heads-up for the $440,000 1st place prize.

Let’s watch the hand being called the ‘Bluff of the Year‘ before I spoil too much. After that, make sure to watch the now-legendary Q-4 offsuit hand from Phil Hellmuth.

I’m torn on whether or not shoving all-in with just Ace High on a mixed board showing a King is genius or madness. But I always fall back on ‘did it work?’ If the answer is ‘yes’ then it was genius, if the answer is ‘no’ then it was madness. And that brings me to this next hand from Phil Hellmuth.

This hand took place during Event #9 of the 2022 US Poker Open. Event #9 was a $25,000 No-Limit Hold’em event that ran spanned March 24th and 25th. The final three came down to Erik Seidel, Phil Hellmuth, and Alex Foxen who finished in that order. With five people left at the final table, Phil Hellmuth got all of his chips in the middle with the Queen of Diamonds and 4 of Hearts. Alex Foxen called with pocket nines. Check out the hand below.

PokerGo titled that video ‘The Worst Poker Hand Phil Hellmuth Ever Played!’ but I have to ask, did it work? Yes. Did Phil Hellmuth win the hand? Yes. Then I’d argue that it’s not the worst hand of poker that Phil Hellmuth has ever played. If he lost the hand, we’d be having a different discussion but he won the hand and went on to earn $315,000 for second place against Erik Seidel who earned $472,500.

To get a sense of how much that Q-4 offsuit rocked the poker world just search Phil Hellmuth’s name on Twitter right now and you’ll find countless tweets like these:

It’s crazy how much chatter @phil_hellmuth’s call with Q4off has generated. Regardless of the play, it just shows how people love to find criticism of winners. 16 WSOP bracelets… pic.twitter.com/kE8P0BMXTc

No stoppin' the Hellmuth train pic.twitter.com/zvvQ8SvKt8

I would never begin to claim I know the machinations of Phil Hellmuth’s brain. He’s the greatest tournament poker player in history (read my interview with him here). But I’d suspect that’s not an all-in shove he would make too often and he had his reasons for shoving there, reasons many won’t understand. But did it work? It did. He won the hand.

You can catch the final table of the 2022 US Poker Open live (today/Monday) on PokerGo by following that link to their website up at the top of this article!