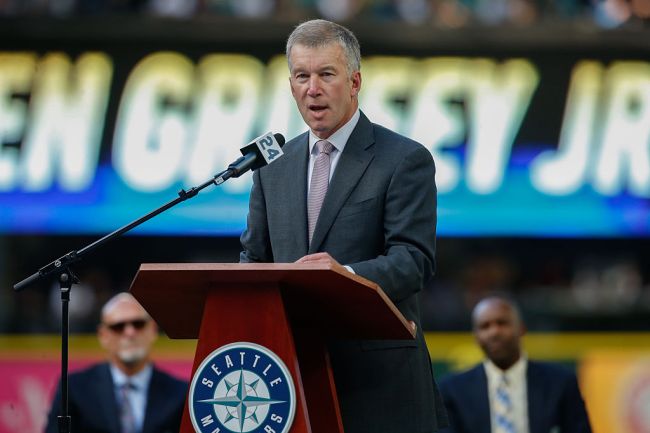 Kevin Mather has resigned as the president and CEO of the Seattle Mariners after his inappropriate comments were leaked over the weekend. The team’s chairman and managing partner John Stanton will serve in both roles in the interim until a successor is chosen.

Mather came under fire on Sunday for a conversation he had over Zoom with the Bellevue Breakfast Rotary Club in Washington on February 5th. During the 46-minute call, which discussed a variety of topics, he spoke disparagingly about former All-Star pitcher Hisashi Iwakuma and outfield prospect Julio Rodriguez.

While discussing the former Mariners pitcher, who just signed on to be a par of the team’s coaching staff, he pointed out his displeasure with having to employ a Japanese interpreter.

“It frustrates me,” Mather said. “For instance, we just rehired Iwakuma, he was a pitcher with us for a number of years. Wonderful human being, his English was terrible. He wanted to get back into the game, he came to us. We quite frankly want him as our Asian scout, interpreter, what’s going on with the Japanese league. He’s coming to spring training. And I’m going to say, I’m tired of paying his interpreter. When he was a player, we’d pay Iwakuma X, but we’d also have to pay $75,000 a year to have an interpreter with him. His English suddenly got better, his English got better when we told him that.”

Mather then brought up the English-speaking abilities of Rodriguez, Seattle’s No. 2-rated prospect.

“Julio Rodriguez has got a personality bigger than all of you combined,” Mather said. “He is loud, his English is not tremendous.”

In response to what his now-former president said, Rodriguez tweeted a meme that expressed his frustration and disappointment.

In addition to his insensitive remarks, Mather admitted to manipulating service time as a way of keeping top prospects in the minor league (including top prospect Jared Kelenic), said that veteran Kyle Seager was overpaid, and bashed his own Single-A team’s facilities. A full transcript of the call can be found here.

After receiving both private and public backlash, Mather released a statement through the team on late Sunday night. It read:

“I want to apologize to every member of the Seattle Mariners organization, especially our players and to our fans. There is no excuse for my behavior, and I take full responsibility for my terrible lapse in judgement.

My comments were my own. They do not reflect the views and strategy of the Mariners baseball leadership who are responsible for decisions about the development and status of the players at all levels of the organization.

I’ve been on the phone most of the day today apologizing to the many people I have insulted, hurt, or disappointed in speaking at a recent online event.

I am committed to make amends for the things I said that were personally hurtful and I will do whatever it takes to repair the damage I have caused to the Seattle Mariners organization.“

The MLB Players Association then released a statement on Monday morning before Mather resigned on Monday afternoon.

The Major League Baseball Players Association today issued the following statement with regard to recent remarks made by Seattle Mariners President and CEO Kevin Mather: pic.twitter.com/xjqqUmBqbS

Mather began working for the organization in 1996 and took over as the Mariners’ CEO and President in 2017. He was also one of three executives who were accused of inappropriate workplace conduct by multiple women in 2009-10 and all three complaints ended in settlements.

Stanton will take over the role in Mather’s permanent absence and offered his sincere apology on behalf of the club with a commitment to be, and do, better.