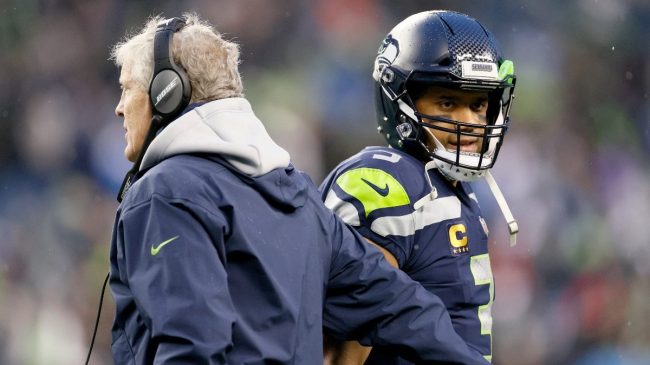 The Seattle Seahawks made the surprising decision to trade Russell Wilson to the Denver Broncos, or so we thought. New rumors are now suggesting Seattle was aiming to trade Wilson years ago and the veteran quarterback wasn’t happy with the club.

Seahawks Had Eyes On Patrick Mahomes And Josh Allen

According to Brady Henderson, Wilson and his camp “were f—ing” pissed” upon Seattle’s continuous scouting of rookie quarterbacks. We’ve heard the rumors of the Seahawks seeking a trade to acquire Josh Allen in 2018. However, the new rumors indicate that the franchise was all in on possibly obtaining Patrick Mahomes as well in 2017.

While on the #Seahawks, Russell Wilson was upset that GM John Schneider attended the pro day for Patrick Mahomes in 2017 and the pro day of Josh Allen in 2018.

It’s kind of amazing that Russell Wilson and his camp were able to keep the drama under wraps for so long. If any of this is true, then both parties were likely seeking a divorce since 2017. For one way, or another, the Seahawks were unable to trade Wilson away but had they done so, the NFL landscape would look completely different.

Instead, the two sides remained together for several more years before a trade was finalized sending Wilson to Denver. Now, the Seahawks are stuck between Drew Lock and Geno Smith. The good news though is the franchise is likely to have a top draft pick next year and there are plenty of exciting quarterback prospects to be had.

We’ll see how it plays out though. Many don’t believe the Seahawks have what it takes to be a contender this season. Meanwhile, all eyes are on the Broncos to shake things up in the AFC West.