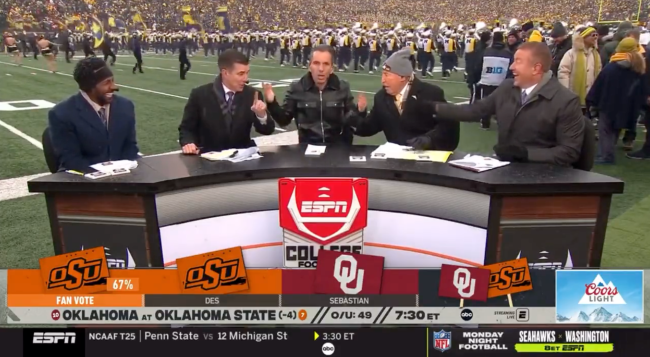 Nobody let Sebastian Maniscalco know that they had moved past the Texas Tech game this morning. As the 48-year-old comedian joined College GameDay in Ann Arbor, Michigan as the guest picker, he accidentally picked the Red Raiders to win Bedlam.

Maniscalco, who is performing in Detroit later this week, joined Desmond Howard, Rece Davis, Kirk Herbstreit and Lee Corso on Saturday. He does not have ties to either school, but Ohio State head coach Ryan Day invited him to join the team for a game earlier this year.

Despite the lack of connection to either program, ESPN still chose Maniscalco. It was an odd choice, especially considering that he began his appearance by saying that he knows nothing about college football.

Not a great start.

As the show went on and the desk picked the games, Maniscalco held his own. Until he didn’t.

It wasn’t his fault, but as the cast went to pick the winner of Bedlam between Oklahoma and Oklahoma State, Maniscalco picked Texas Tech. He had a sheet in front of him that said what game to pick when and who to pick and why.

However, nobody clued him in that they skipped over Texas Tech’s game against Baylor. As a result, when Davis asked him who he was picking in Bedlam, Maniscalco went on a tangent about the Red Raiders program.

He told a story about how Texas Tech offered him a scholarship for engineering but he turned them down to go into standup comedy. Thus, he was picking the Red Raiders.

The only problem was that Texas Tech wasn’t playing. It made for commotion amongst the desk and a very funny, awkward moment.

College football fans were not a fan of Maniscalco’s appearance.

Why on earth is Sebastian Maniscalco the celebrity guest picker? At least get someone somewhat knowledgable about college football.

Maniscalco may never get invited back to be a celebrity picker

Of all the choices for Gameday picker, they choose Sebastian Maniscalco?

Why is Sebastian Maniscalco doing the guest picking?

I get that he’s only there for a publicity stunt, but having Sebastian Maniscalco as guest picker say “I literally know nothing about college football” is cringeworthy. #collegegameday