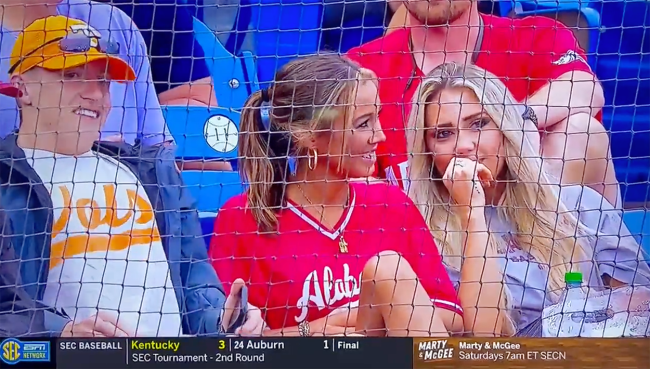 There are very few things in life like rivalries in college sports. When you really think about it, a college rivalry breeds deep-rooted hatred of another group of people based singularly on the fact that those people chose a different place of education. It’s the best.

When it comes to college rivalries, the most visceral are often found in the Southeastern Conference. Whether it be Ole Miss and Mississippi State, Georgia and Florida, or Alabama and Auburn, the dislike is deeply-ingrained.

To exemplify the rivalries of the SEC, one particular fan at the conference’s baseball tournament has gone viral.

No. 5-seed Auburn baseball was eliminated from the SEC Tournament with a loss to No. 12-seed Kentucky in the first round. The Tigers are no longer playing.

But that did not stop one fan — Jeff — from sticking around and watching the rest of his conference. In particular, he sat amongst a group of Crimson Tide fans who appeared to be his friends as Alabama took to the diamond against Tennessee.

Because Auburn lost, Jeff could not wear Tigers gear to the game. But he wanted to root against his rivals, so he wore Tennessee gear from head to toe.

His reasoning? He just hates Alabama.

Jeff is all of us! Welcome to Big Orange Country Jeff! #Vols #BamaSucks #SECBSB pic.twitter.com/93zihmxSx5

You have to love the honesty here, but there are questions to be asked. Where did an Auburn fan get a Tennessee jersey and hat so quickly? Does he have ties to the Vols or did he go out of his way to pick up gear… just to root against the Tide?

Either way, Jeff has made himself a lot of friends in Knoxville. It really does just mean more in the SEC.