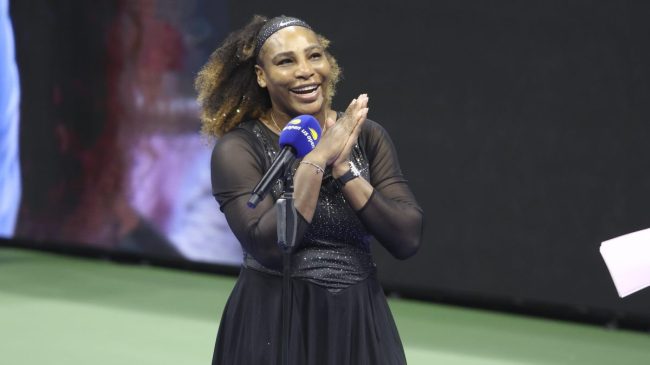 Serena Williams shocked the world when she announced her retirement in Vogue Magazine just a few short weeks ago. Fans immediately flocked to social media to give the superstar her flowers. But before she sails off into the sunset, the legendary women’s tennis player has business to take care of.

Williams is playing her last event at the place her legendary status first began to grow, the US Open. The 2022 edition of the tournament will be her last and got underway on Monday. She faced Montenegro’s Danka Kovinic in what could well have been her final singles match as a professional.

Nobody knows which match will be Williams’ last. She could have lost to Kovnic, ending her career. Or maybe she makes a shock run that keeps her playing for the next two weeks.

But whenever she bows out, people want to see it. This was no more evident than in a photo posted on Twitter Monday night.

No one can ever say Williams isn’t or wasn’t a draw. The superstar is a 23-time Grand Slam champion while she and her sister Venus captivated the tennis world for the better part of the last two decades. Fans couldn’t believe the incredible sight.

These type of moments are incredible! All for #SerenaWilliams https://t.co/AFsVvoqLiS

keep talking about how women don’t draw crowds when people be streaming her match on an airplane https://t.co/2ZBu0qtQc4

It’s so dang cool seeing shared moments like this around sports https://t.co/9XzqRWor3X

Williams’ singles career could be in jeopardy in round two as she faces second-seeded Anett Kontaveit of Estonia. Though the 25-year-old Kontaveit has never been beyond the quarterfinals of a Grand Slam.

Should she lose, however, her tournament won’t be over. Serena and Venus also earned a special wildcard bid to compete in the doubles portion of the tournament earlier this week.

One things is certain, however. When Williams’ career does finally come to close, everyone will be watching.