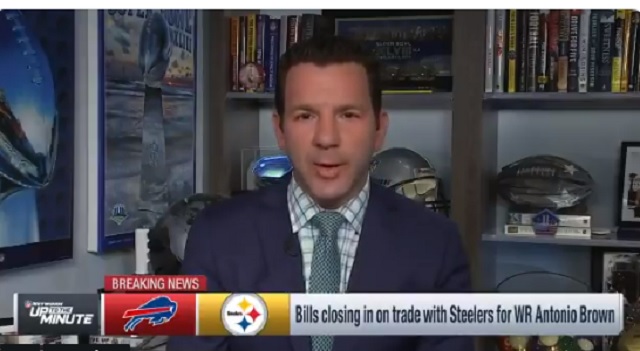 Maybe Antonio Brown isn’t on his way to Buffalo after all.

Antonio Brown is calling his trade to the Bills “fake news” pic.twitter.com/i95KYmZ8dr

And now we have to different reporters claiming that the Bills are “unlikely” to trade for Brown.

An NFL source says #Bills have inquired about Antonio Brown with the #Steelers, but no deal is imminent. In fact, another league source termed it "unlikely."

Moving the chances of #Bills acquiring Antonio Brown to the less than likely bin.
And can firmly report that nothing is considered "imminent."

Told Buffalo did contact Steelers regarding Brown as part of doing their due diligence.
How far it got beyond that is uncertain.

Just got a couple texts on the report (apparently) of Antonio Brown done-deal trade to Buffalo. Source calls report “erroneous” and says a deal to the Bills is “not even close.”

Update: ESPN’s Adam Schefter has now chimed in on the Antonio Brown-Bills trade rumors and it’s not looking good for Rapoport.

Buffalo has spoken to Pittsburgh about a potential trade for WR Antonio Brown, as have a handful of other teams. Those talks occurred only in recent days. A source this morning called a Brown-to-Buffalo trade “unlikely.” Not out of the question but, at this time, “unlikely.”

Another source on a potential Antonio Brown-to-Buffalo trade said it will not happen. “I don't think the Bills trade was ever close to happening,” said one source involved in those talks. Steelers snd Bills briefly talked but “this is an old story. It was dead on Wednesday.”

As talks continue on a potential Antonio Brown trade, and the situation continues to be fluid, “nothing is close” at this time, per a source. The Brown saga goes on. The Steelers has told teams that they expected, and wanted, this in place by Friday. That now looks challenging.

The Bills are nowhere close to trading for Antonio Brown. And the Broncos and Cardinals and Jets were never in it. Be careful what you read these days, folks. It gets more ridiculous by the day. Especially in some parts.

It worth noting that Rapoport went on NFL network to double down on his report that a deal was imminent.

From our breaking news segment in the wee hours of Friday morning: The #Bills are working to trade for #Steelers WR Antonio Brown. There are things to work out, but the deal is close to being done. pic.twitter.com/gAEf3q8doQ

This would be a pretty big L for Rapoport if he ends up being wrong.

Ian Rapoport got up in the middle of the night just to lie to everyone about AB? 🤔

Knew it, if Adam Schefter hasn't reported it then it aint true, Ian Rapoport is garbage. https://t.co/gp86In9Njp

it’ll be the end of ian rapoport if this doesn’t go through https://t.co/BhecMNbUvR