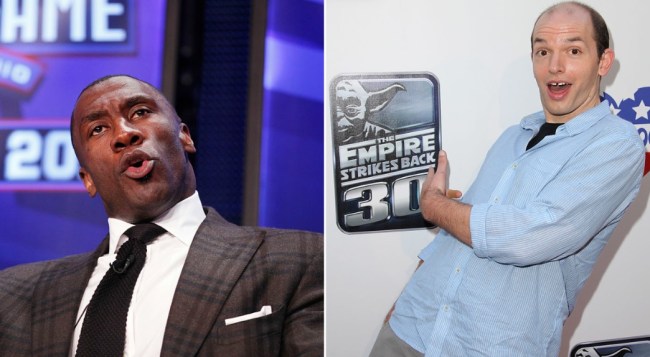 FS1 host Shannon Sharpe made the mistake of getting into it with a professional comedian and things didn’t go too well for him.

On Saturday, Sharpe, who is a Lakers superfan, mocked Clippers fans on Twitter while responding to an angry fan.

Comedian Paul Sheer, who starred in the sitcom “The League”, tweeted at Sharpe over his comeback at the Clippers fan.

Sharpe fired back at Sheer by making fun of the gap between his two front teeth.

Your 2 front teeth seems like they got divorced or at least separated https://t.co/XpEoyfDYsu

Sheer went on to ruthlessly remind Sharpe about the time his girlfriend left him for MLB player Marlon Byrd.

With comebacks like that, I get why your girlfriend picked Marlon Byrd. https://t.co/kDEuL3z98y

Sharpe tried to make another joke about Sheer’s tooth gap but the fight was over.

I didn’t know that the Paul Scheer vs Shannon Sharpe beef was exactly what I needed but it is https://t.co/QWQbe1kNYb

“Hey Siri, show me the difference between funny for a professional athlete and funny as a career” https://t.co/l8j2dGXgSO