Shaq Rips James Harden To Shreds For Lying About His Time In Houston ‘When You Say You Gave the City Your All, That Ain’t True’ 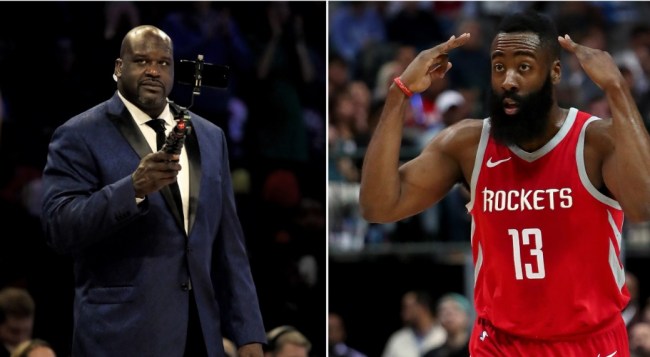 The Inside The NBA crew returned to the air Thursday night and gave the NBA world their thoughts on the Nets-Rockets blockbuster trade that featured superstar guard James Harden.

During the segment, Shaquille O’Neal blasted Harden for not telling the truth when he said he gave it his all while in Houston. Shaq argued that the Rockets bent over backwards for Harden and the superstar guard didn’t deliver for the team when it mattered.

"When you say you gave the city your all, that ain't true."@SHAQ reacts to the James Harden trade

“When you say you gave the city your all, that ain’t true,”

“When you say I gave you everything, I say no you didn’t … He ain’t do nothing. He ain’t step up when he was supposed to step up.”

Shaq continued to criticize Harden for not showing up in the playoffs despite getting paid $40 million a year.

“When you’re the man and you make all the money, you make $30, $40 million a year, it’s a big responsibility,. “Chuck has said this many times, when you’re the man, you got a big responsibility. It’s all on you. When it comes time to show up, he ain’t show up, so I know a lot of people in Houston are glad he’s gone. Now he’s got his little superteam. He gotta win this year. He don’t win, it’s a bust. Period.”

Harden better win in Brooklyn because he’s never going to hear the end of it from people like Shaq.