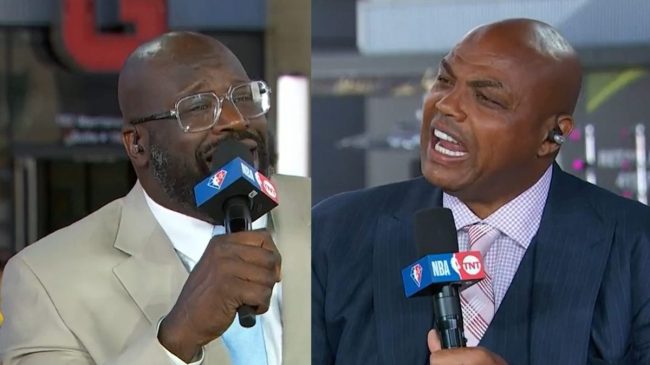 Back in late October, during an episode of the beloved pre-and-post-game show Inside The NBA, Hall of Fame center Shaquille O’Neal bet fellow basketball legend Charles Barkley $10,000 that he couldn’t spell the world spectacular. This, of course, isn’t the first time that Shaq tried to clown on Chuck’s spelling abilities, as we brought you the story of Barkley trying to spell “monumental” earlier this year.

Appearing on CNN This Morning earlier this week, Chuck was reminded of the incident and, as a result, remembered that Shaq still owes him the ten grand for the bet.

“I have not gotten paid yet. I have not gotten my $10,000 yet. Hey, Kaitlan, that’s that Auburn education! I actually had forgotten about that. I want to thank you guys for reminding me about it,” Chuck told CNN This Morning hosts Kaitlan Collins, Don Lemon, and Poppy Harlow.

Barkley got it right.

Barkley: "I have not gotten my $10,000 yet! I actually forgot about that!" @donlemon @PoppyHarlowCNN @kaitlancollins pic.twitter.com/9USD4KsfBq

Fans of the NBA will be thrilled to hear that — after years of teasing potential retirement — Barkley re-upped with Turner Sports back in October as he signed a 10-year extension with Warner Bros. Discovery that could approach $200 million.

The 59-year-old Hall of Fame power forward — who played with the Philadelphia 76ers, Phoenix Suns, and Houston Rockets during his 16-year-long NBA career —  has been an analyst on Inside The NBA since 2000.