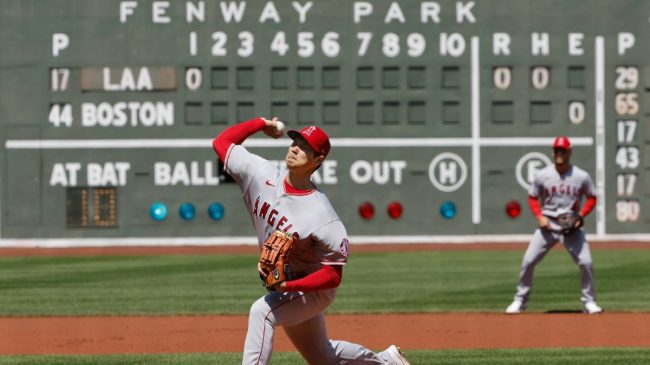 With a rare set of skills, he’s become one of the game’s most feared players. His ability to both pitch and hit at a high level make him one of baseball’s most dynamic players.

Last season, the slugger pulled in his first MVP by bashing 46 home runs and knocking in 100 RBIs. He also hit swiped 26 bases and led the league in triples.

As dangerous as he is at the dish, he’s equally so from the bump. Look no further than this filthy slider as evidence. The All-Star is as difficult to make contact off of as he is to get out in the batter’s box.

On Thursday, that versatility is on full display.

Ohtani is starting on the mound in Los Angeles’s matchup against the Boston Red Sox. Which is quite fitting considering his constant comparisons to former Bo Sock Babe Ruth.

The mid-afternoon start is providing us with more history surrounding the former Japanese League star.

Shohei Ohtani (batting third) is the first starting pitcher to bat in the top four spots in a game at Fenway Park since Babe Ruth on Sept. 20, 1919.

Ohtani is hitting third today while also getting the nod on the mound. It makes him the first player since Ruth to both make a start at pitcher while hitting in the top four spots in the order.

And he’s not disappointing thus far.

Through four innings, Ohtani has yet to allow a run while striking out seven Boston hitters. He’s thrown 53 pitches over those four frames, with an incredible 45 landing for strikes. That’s an insane 85% success rate. For perspective, the average MLB rate is closer to 65%.

From the plate, he’s recorded the Angels’ only hit, going 1 for 2 across his first pair of at bats.

Ohtani will look to get his team the win, doing it on both offense and defense. Midway through the game, the score is tied 0-0.