Video Shows A Sick Lamar Jackson Struggling To Walk Into Stadium, Is Out With Mysterious Illness 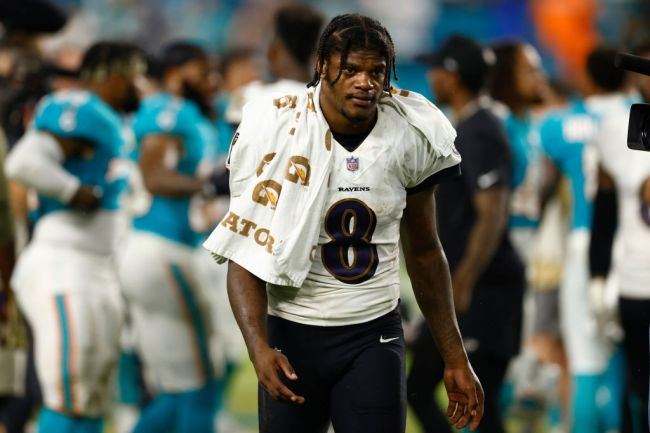 Lamar Jackson will not play on Sunday due to a mysterious illness.

Before Sunday’s Ravens-Bears game, Jackson was seen struggling to walk into Soldier Field to get tested.

Ravens’ medical doctors are unsure what illness Jackson has but he’s being forced to sit out Sunday’s game vs the Bears.

Ravens had a non-COVID virus go through their organization last week, affecting a multitude of players including Lamar Jackson, WR Rashod Bateman, C Bradley Bozeman, amongst others. Jackson arrived at stadium a short time ago and team soon will test him to see if he can play.

#Ravens QB Lamar Jackson is arriving to the stadium soon, per @StaceyDales, but sounds like he’s really not himself. Jackson will try to go and they are working to keep him hydrated to play, but he has been hit very hard by this virus. Tyler “Snoop” Huntley is the backup.

The #Ravens and their medical staff have tested Lamar Jackson. It’s not COVID. But the exact virus hasn’t been identified yet. It’s not the flu. But it is serious enough to make him feel horrible. He’s just not well enough to go. https://t.co/gJayep60kC