Simone Johnson, The 18-Year-Old Daughter Of The Rock, Has Officially Signed A Contract To Wrestle For WWE 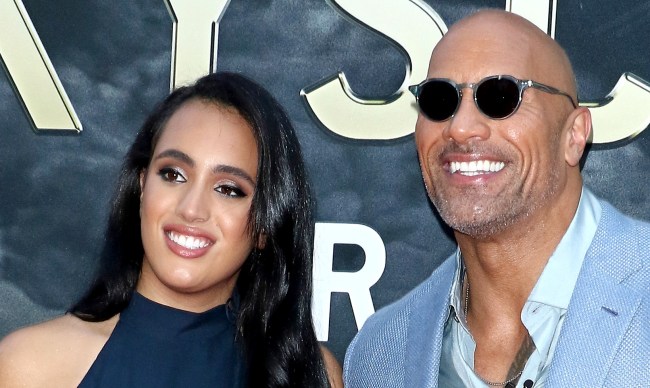 Can you SMELLLLLL…. what The Rock’s daughter… is cooking? Sorry, had to do that. It’s not every day that Simone Johnson, the daughter of The Most Electrifying Man in Sports Entertainment, signs a contract with the WWE.

In fact, the 18-year-old Simone has already begun her training at the WWE Performance Center in Orlando.

Should she make it to the big show, Simone would become the first fourth-generation Superstar in WWE history, following her dad, her grandfather Rocky Johnson, and her great-grandfather “High Chief” Peter Maivia into the squared circle for Vince McMahon’s company.

“It means the world to me,” Johnson said about her new career path. “To know that my family has such a personal connection to wrestling is really special to me and I feel grateful to have the opportunity, not only to wrestle, but to carry on that legacy.”

“To the little girl who fell in love with wrestling & said “this will be my life one day”, this is for you. I’m humbled, grateful & ready to work. Let’s do this,” she wrote on Instagram.

“Simone Johnson’s unbridled passion and incredible drive has earned her a coveted spot training with the elite athletes from around the world at the WWE Performance Center,” said WWE Executive Vice President, Talent, Live Events & Creative Triple H. “Not only does Simone now have an opportunity to cultivate and display her passion for WWE within the Performance Center, but she’ll carry on the tradition of her incredible family lineage while creating her own impact as WWE’s first fourth generation Superstar.”

Simone will also have the opportunity to wrestle alongside (or against) her and her dad’s cousin Nia Jax (real name: Lina Fanene) should she make it through the training.

Congrats @SimoneGJohnson! Enjoy the journey, you were built for it. https://t.co/cEwjdSg0Pf

On Wednesday at 3 p.m. ET Johnson will be giving an interview on WWE’s digital platforms to talk more about her decision to attempt to continue the legacy of her family in professional wrestling.