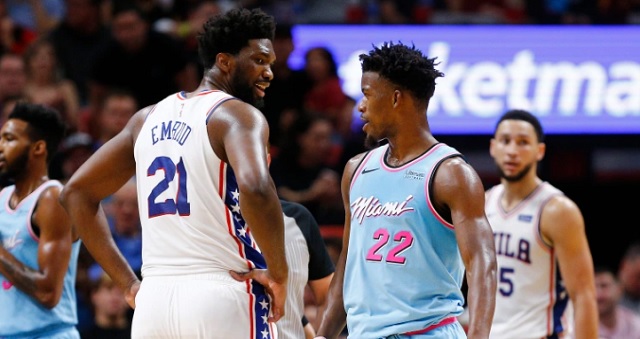 Could Joel Embiid be thinking about reuniting with former teammate Jimmy Butler?

On Monday night, Butler crushed the Milwaukee Bucks in game 1 of the Eastern Conference semifinals by scoring a career-high 40 points in the Heat’s win.

During the game, Embiid showed Butler some love on Twitter in a series of tweets which included one where he cryptically posted “If.”

Embiid is openly campaigning to have Elton Brand fired and I support him 100%. https://t.co/NqMAZjFy48

Joel Embiid has and will continue to be pro Jimmy Butler, and keeping Jimmy Butler would have meant no Ben Simmons; because there’s no way in hell Ben would have re-signed if Jimmy was still here.

Not sure if Joel knows how it comes off. https://t.co/a0I0EhbOjk

We've reached the "Embiid not subtly tweeting about Butler playing well" part of the Sixers offseason, it seems.

We offered Jimmy max instead of keeping our clown coach and now giving our clown GM more power after he put together a disaster roster. Yes @JoelEmbiid you are correct haha https://t.co/FYk5Vny8KL