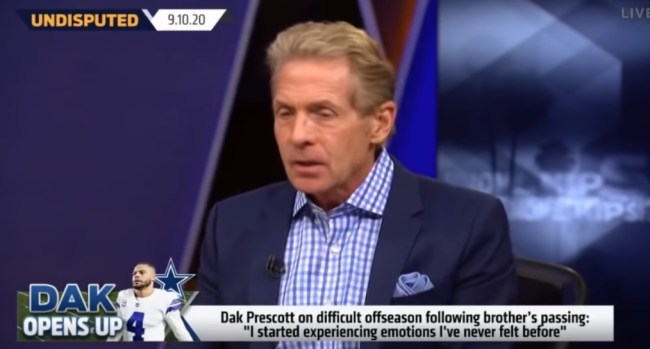 Skip Bayless may have gone too far with his latest hot take while discussing Dak Prescott and depression.

Earlier this week, the Cowboys franchise QB revealed that he was already suffering from depression before learning of his brother’s suicide which made things extremely tough for him to deal with.

“All throughout this quarantine and this offseason, I started experiencing emotions I’ve never felt before,” Prescott said.

“Anxiety for the main one. And then, honestly, a couple of days before my brother passed, I would say I started experiencing depression. And to the point of, I didn’t want to work out anymore. I didn’t know necessarily what I was going through, to say the least, and hadn’t been sleeping at all.”

Prescott has endured a difficult offseason, including the loss of his brother, a man who got him to play quarterback when he was young.

During the latest edition of FS1’s Undisputed, Bayless criticized Prescott for showing “weakness” as a leader of “America’s football team” by publicly talking about his depression in public.

Bayless was widely condemned for his comments regarding Prescott and his depression.

Dak Prescott basically said: I'm a human being, I can be vulnerable at times. It's been a really hard year for me, & I want to normalize mental wellness & admitting when we aren't OK.

And Skip Bayless basically said: nah, toxic masulinity is the way for me b/c football.

Don’t listen to him.

It takes so much strength to open up about depression, like Dak Prescott did. It’s OK to not be OK. It’s OK to get help.

Wow! A lot of us did know in Dallas and chose not to report it. It’s called empathy. Secondly, criticizing someone for saying they struggled with the loss of their brother AFTER the loss of his mother THAT he did play through is a problem for you, the fan and an analyst? https://t.co/JiSUhn2K35

Just shameful, Skip Bayless.
Shameful. And FOX should be ashamed, too.