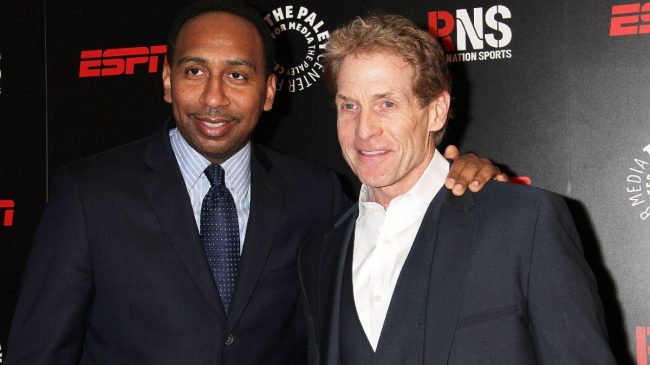 Kevin Durant was magnificent in the Nets’ 110-107 victory against the Knicks on Sunday.

His 53 points led the team to a huge Eastern Conference win as they look to solidify their standing in the postseason race.

Durant was 19-of-37 from the floor, just missing out on a double-double with his nine assists, and he nailed some clutch shots to ice a close game late. More impressively, he did it with teammate Kyrie Irving having to sit on the bench.

With the game tied at 103-103 late in the fourth quarter, Durant asked for the ball and subsequently drained a three-pointer to put the Nets up with under a minute remaining. He then hit four free throws in the final 10 seconds to put the game away.

Ice in his veins.

Another look at *that* shot from @KDTrey5 🤩 pic.twitter.com/13swth6JRx

The incredible performance got folks in the media talking about Durant’s ability to shine in the toughest moments.

One of those media members was Skip Bayless, who didn’t hold back when making a comparison between Kevin Durant and LeBron James.

Bayless says that KD has that clutch gene while LeBron shies away from the biggest moments. Take a look below.

Kevin Durant just made the big late three to put the Nets ahead. He just TWICE demanded the ball on in-bounds plays so he could go make 4 straight closing free throws (now 90% for the season). 53 points. NBA's best clutch player. Everything LeBron isn't.

It was just last week that Bayless criticized James for passing up an opportunity to take the game winning shot in a Lakers’ loss to the Rockets. He went as far as to call LeBron “chicken” for not trying to end the game on his own.

For those that may have missed it, James passed on a lay-up in the final seconds of that loss to Houston. Many were critical, noting that he could’ve at least tried to get to the foul line had the shot not gone in. Instead of looking for contact, he dished it out to Carmelo Anthony, who missed a jumper as time expired.

Durant, on the other hand, wanted the ball in the clutch. He invited the pressure and came away on top. This win could help Brooklyn work their way into a top six seed. Doing so would allow them to avoid a play-in situation come playoff time.

The Lakers, meanwhile, are just hoping to sneak in.

Durant earned the respect of a lot of viewers with today’s performance. He’s also earned the title of NBA’s best clutch player.