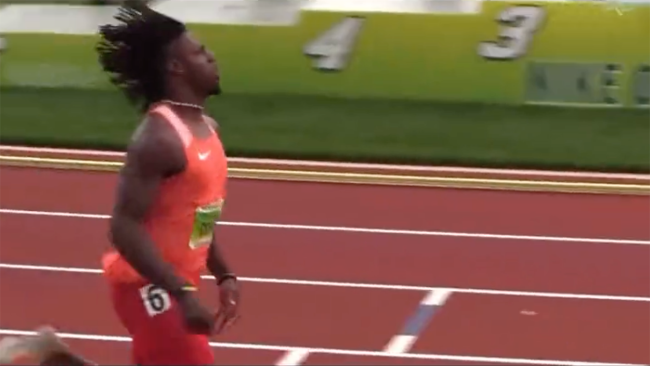 SMU football signee Pierre Goree Jr. is ridiculously fast. Although he is unable to run track on the next level, he established himself as one of the best to ever do it.

Goree is a sprinter who specializes in the 100-meter. And now he’s a national champion in the event.

On Saturday night, the Duncanville, Texas native won the boys 100-meter dash at the Nike Outdoor Nationals at the University of Oregon’s legendary Hayward Field with a time of 10.36 seconds. Goree’s time was only .56 seconds off of the Gold Medal-winning time at the Tokyo Olympics last summer and he’s only a senior in high school.

Forever in the history books. Forever a National Champion. Forever a 𝔇𝔲𝔫𝔠𝔞𝔫𝔳𝔦𝔩𝔩𝔢 𝔓𝔞𝔫𝔱𝔥𝔢𝔯!#Legendary 🐐

To make things even more impressive, he was utterly dominant and won the national championship by a full .07 seconds.

Not only did Goree win the national championship as the top sprinter in the United States, he did so at 6-foot-1, 220 pounds. And that might be an underestimate. He’s a big dude.

Goree, who committed to play safety for the Mustangs as a three-star recruit in the Class of 2022, will get to campus in Dallas later this summer. When he does, he has a legitimate chance to earn significant playing time right away.

His tape is a lot of fun.

And SMU signee Pierre Goree Jr. is always out for blood.

What coach wouldn’t want a hard-hitting, head-hunting national champion sprinter on the field in some capacity?! Look out for Pierre Goree Jr. on the next level this fall, he’s going to be a problem!