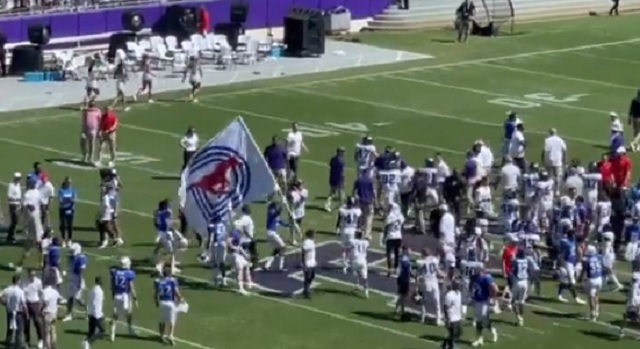 Things got a bit heated after SMU’s win against TCU.

After the game, an SMU player tried to plant the team’s flag at midfield in TCU’s stadium in front of a large group of Horned Frogs’ players. The TCU players immediately stopped the plant flag attempt and things nearly got ugly between the two teams.

SMU WR Rashee Rice, the one fueled the rivalry with his comments this week, immediately takes the SMU flag to midfield after SMU’s 42-34 win over TCU. A small scuffle ensues. pic.twitter.com/kO0xxpktv9

Another video shows TCU players ripping the flag apart before it was able to be planted in midfield.

Video of the SMU-TCU flag skirmish. SMU tried to plant it. TCU ripped it off. pic.twitter.com/KjVL7n66GZ