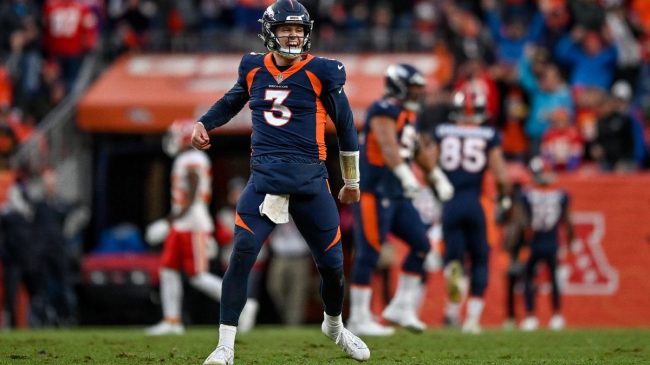 The Aaron Rodgers sweepstakes has been wide open this offseason, with a number of teams vying to land the reigning NFL MVP.

Adding Rodgers makes any team an immediate Super Bowl contender and it seemed that his decision was set to come down to four teams. Those organizations were the Packers, Steelers, Broncos, and Titans.

On Tuesday, the All-Pro signal caller made up his mind. He opted to return to Green Bay, spurning the advances of Pittsburgh, Denver, and Tennessee.

Rodgers signed a massive four-year, $200 million deal with $150 million being guaranteed money. The contract easily makes him the highest paid passer in the league while also solidifying his status in Green Bay for the immediate future.

At 38 years old, this could be the deal that keeps Rodgers with the Packers for the remainder of his career.

While Green Bay is ecstatic to bring the talented passer back, others are left wondering where to go from here.

The Broncos appeared to be the favorite to land Rodgers had he opted not to stay in Green Bay. Unfortunately, they came up just short of signing the MVP signal caller.

Is Drew Lock the answer or do they go after another passer in free agency? Is there a possibility of taking someone in the upcoming NFL Draft?

Social media was quick to react to the news, and it’s giving Broncos fans a hard time for the false hope had before Rodgers inked his deal with the Packers.

Broncos fans when they get to talk about their big-time new QB signing but its Mitch Trubisky instead of Aaron Rodgers pic.twitter.com/o5EakDo80F

Will be very interesting to see what becomes now of Jordan Love. His former OC is the head coach of Denver and needs a quarterback. What the #Broncos do will speak volumes. #Packers #Rodgers

Alexa play What Hurts The Most by Rascal Flatts https://t.co/4kMfdQMw1x

Ranking who is having the worse day:

Everyone who thought they were a genius for sitting on a Broncos Super Bowl future pic.twitter.com/CfhdQFhCvz

The Broncos in a week pic.twitter.com/ZfaorRyB8Q

The Broncos, Steelers, and Titans GMs this morning pic.twitter.com/jg23ziqUSF

don't cry because it's over smile because it happened @Broncos pic.twitter.com/c9PEWpcNeA