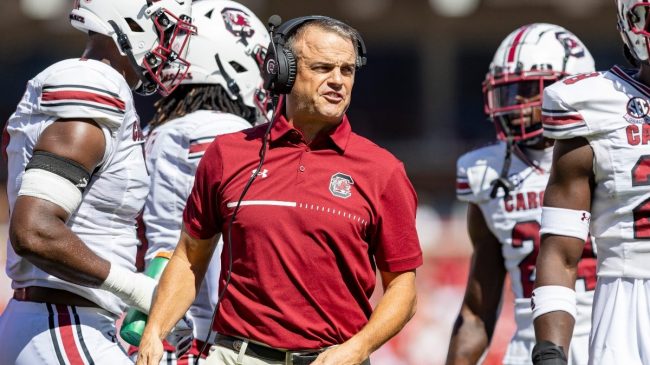 The South Carolina Gamecocks have had a rough start to the season. After falling 1-2, it’s not looking great for the squad. Now, head coach Shane Beamer is getting lit up for his latest comments.

During a press conference, Beamer tries to focus attention away from the recent struggles of the team. South Carolina finished with a 7-6 record in 2021. Meanwhile, the current 1-2 record isn’t great either. The Gamecocks have gone 8-8 in their last 16 games. However, rather than focusing on getting better, Shane Beamer talks about fourth-quarter wins.

Good news South Carolina fans. You were 10-2 last year according to this brand new stat backed by elite analytics. pic.twitter.com/JM8p0eFvrf

It’s like he’s trying to mask the fact that his team is much better than they are. Sure, winning the fourth quarter is a great way to maintain morale. However, it’s not translating to wins for South Carolina. Now, fans are lighting him up for it.

Shout out to this guy for doing all of the research.

So, their true 4Q record was 8-3-2 (7-3-2 if you only look at reg season). Of those 8 wins, 2 of them they scored more because the other team took out their starters, and the other was against a cupcake.

Interestingly, they were outscored in the 4Q in their biggest win (vs UF).

Todd Venable brings up the exact reason why Shane Beamer’s stat is completely bonkers. It’s not a great way to indicate success whatsoever.

LMAO – one of those 4th Q “wins” came against A&M, in a game that was the Aggies most dominant SEC win last year.

This seems to check out.

South Carolina ELITE against backups when trailing by 25

So, hopefully, South Carolina can get back in the win column against Charlotte on Saturday. Maybe Shane Beamer will try to win more than just the final quarter of the game.