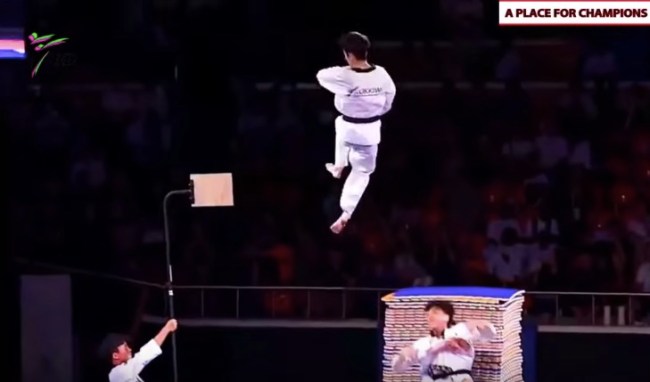 When’s the last time you watched actual Martial Arts footage that wasn’t inside of The Octagon on in a movie? The Summer Olympics? Some random clip on YouTube? Maybe never?

Every now and then one of these ‘holy shit!’ clips falls into my lap like the Taekwondo clip below and it makes me wonder why I’m not paying attention to these obscure/fringe sports that have some of the most badass highlight reels on the Internet (like ‘Cheese Rolling‘).

This clip has blown up over the past few days. I see it in my Twitter feed at least once an hour (follow me on Twitter at @casspa), and every time I have to stop and watch at least a few seconds becuase it’s totally batshit crazy and that’s not an exaggeration in the least bit.

The short clip is a highlight reel from a South Korean taekwondo demonstration and there are literally people flying in the air. No board is left unbroken. In fact, they prove that wooden boards are made for nothing other than being broken into tiny pieces.

All of the board breaking is awesome but it’s the high-flying aerobatics that has everyone in awe. There’s no explanation for how these martial artists are able to fly so damn high and linger in the air like they’re suspended from cables (they’re not).

It’s like they saw The Matrix and said ‘that’s cool, but you know what would be even better? If we did the same stunts without any of the Hollywood special effects/SFX’.

The crew you’ll see below is the Kukkiwon Demonstration Team and they were performing the routine at the at the opening ceremonies of the World Taekwondo Hanmadang, according to Business Insider. I double dog dare you to try and keep track of how many wooden boards get broken because you’re going to lose track within the first few seconds.

I get that these martial artists are being thrown into the air by the other teammates but am I crazy for thinking they seem to linger in the air a little too long?

Douglas Adams, author of The Ultimate Hitchhiking Guide to the Galaxy, said that the trick to flying is this: “There is an art to flying, or rather a knack. The knack lies in learning how to throw yourself at the ground and miss. … Clearly, it is this second part, the missing, that presents the difficulties.”

If anyone’s going to figure out how to fly it’ll be the Kukkiwon Demonstration Team because they’ve already got the first part mastered.