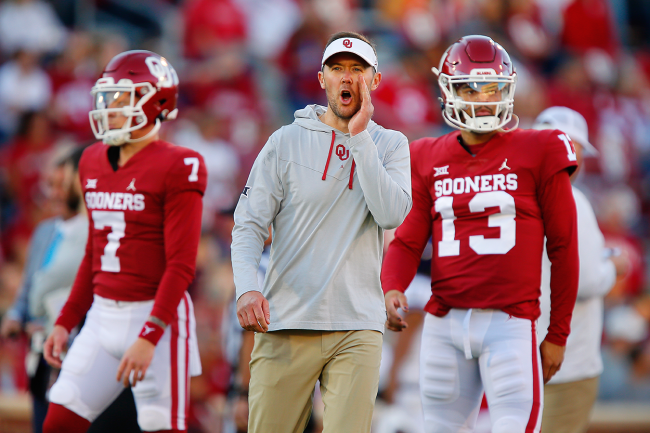 It has been a bizarre season for the University of Oklahoma football program. And now, Spencer Rattler’s uncle is predicting that it is only going to get even more chaotic.

Meanwhile, Riley was rumored to be leaving Norman for Baton Rouge for the LSU job. After losing to the Cowboys, Riley made it clear that he was not going to be the Tigers’ next head coach.

Since then, “That B*tch Out West,” as Sooners fans are calling him, has brought much of his former staff and recruiting class with him to Los Angeles.

Of those who decided to stay thus far, however, is Williams.

As of December 7, the true freshman, former five-star recruit is staying put. The Sooners will play Oregon in the Alamo Bowl and Williams will be QB1.

Whether Williams stays beyond the bowl game on December 29 is yet to be seen. Rattler’s uncle, Scott Konkel, certainly doesn’t think he will stay in Norman.

Konkel is predicting that Williams will follow Riley to USC and play his remaining eligibility in Los Angeles.

In response to the photo of the players meeting with Venables, one Twitter user noticed that he didn’t appear to be paying attention. Konkel thinks its because he was dreaming about California.

In addition, as rumors surround former LSU passing game coordinator and recently-fired Panthers offensive coordinator Joe Brady, one reporter pointed out that Williams once wanted to play for Brady. Brady, who might go to Oregon, could potentially bring Williams in as a transfer.

Not according to Konkel. He’s going to USC.

When he heads to USC like Riley and he had planned. Don’t say I didn’t warn ya.

And Konkel did not stop there. As one person on Twitter speculated about a Caleb Williams vs. Jaxson Dart quarterback competition at USC next season, another replied that Williams has not transferred. Konkel says just wait.

Now, who knows what Spencer Rattler’s uncle actually knows about the ongoings at Oklahoma. Especially after his nephew chose to leave.

But, if Williams does transfer and joins Riley at USC, don’t say he didn’t warn ya.