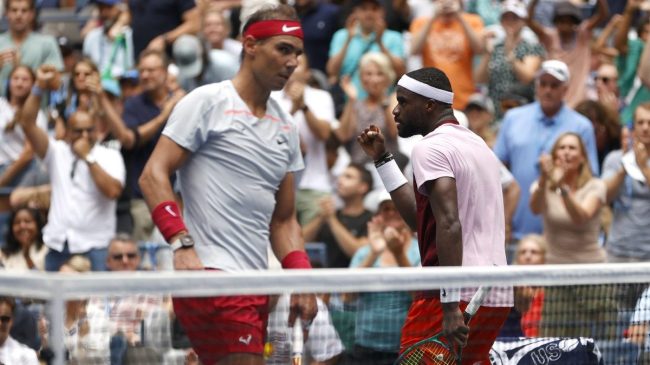 Rafael Nadal had been unbeatable in major championships in 2022. The tennis legend was 22-0 heading into his US Open fourth-round showdown with young American star Frances Tiafoe.

The keyword there is “was.” As the 24-year-old from Hyattsville, Maryland pulled off a 6-4, 4-6, 6-4, 6-3 upset victory over the legendary Spaniard. The entire sports world took time to stop and recognize the incredible accomplishment.

FRANCES TIAFOE HAS DONE IT pic.twitter.com/V0dnN5eXHz

He even had some famous fans in attendance.

Seal is here to cheer on Frances Tiafoe at the #USOpen. The first name on credential reads "Seal." The last name, "Seal." It says "Seal Seal." Simply incredible

Man. Nadal obviously not at his best, but he gave Tiafoe plenty of opportunities to buckle, and Tiafoe said no way. https://t.co/6k9cmA68P9

TIAFOE GOT THEM NERVOUS!!!!

The crowd in Flushing Meadows was equally excited.

This was so good pic.twitter.com/APmPJXG1FP

At a time where American tennis fans are saying goodbye to one superstar in Serena Williams, they may just be seeing the next generation of them in Tiafoe and Coco Gauff.

This is a moment Tiafoe has been training for his entire life. Including his first trip to the US Open when a 16-year-old Frances Tiafoe got the opportunity to practice with a then 28-year-old Rafa Nadal.