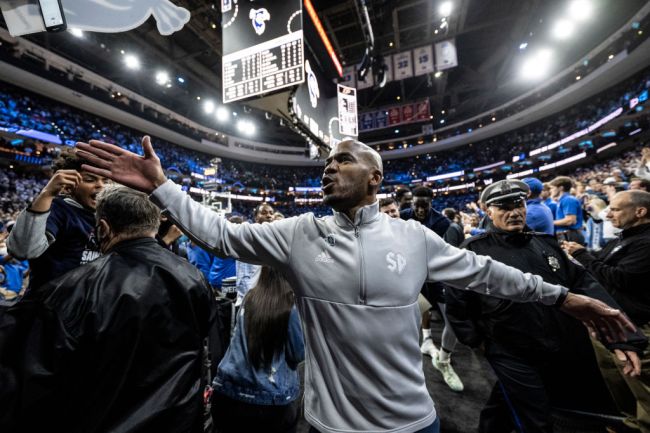 It appears that Shaheen Holloway already has a new job not long after his team was eliminated from the NCAA Tournarment.

On Sunday, Holloway’s Saint Peter’s team got crushed by North Carolina in the Elite Eight, ending their Cinderella run.

Not long after the game ended, there were reports stating that Holloway as finalizing a deal to sign with Seton Hall to become their new head coach.

BREAKING: Saint Peter's coach Shaheen Holloway is finalizing a deal to become the next head coach at Seton Hall, per @NJHoopsHaven.https://t.co/efO71xuoAN pic.twitter.com/I3G0vORkbb

Seton Hall expected to finalize a deal with Saint Peter’s Shaheen Holloway as its head men’s basketball coach, according to Jerry Carino, who reported the news Sunday evening moments after the Peacocks’ Cinderella run in the NCAA Tournament came to an end in the Elite Eight against North Carolina. Holloway, 45, was a star point guard for the Pirates (1996-00) and most recently an assistant coach (2010-18) with the program under former head coach Kevin Willard. Maryland hired Willard (2010-22) away from SHU March 21.