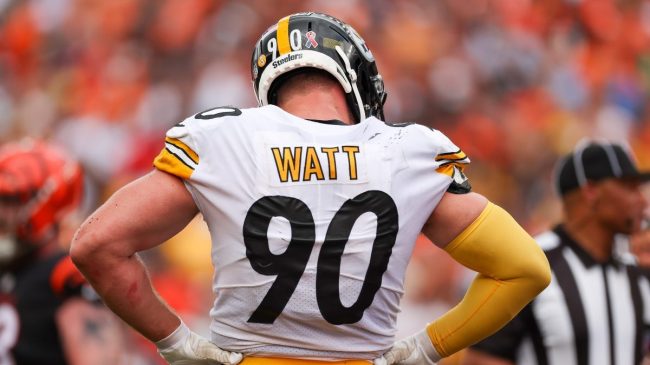 The Pittsburgh Steelers defense was lighting up the Cincinnati Bengals in the season opener. They forced five turnovers and kept the team in the game throughout the match. However, TJ Watt fell to injury, but since then, has received an uplifting update. For that reason, he delivered the perfect response and it has the fanbase going bananas.

According to Ian Rapoport, “Watt suffered a torn pec muscle, but did not tear the tendon.” This specific injury has more of a six-week timetable rather than the entire season. Additionally, the Steelers star does not require surgery, which bodes well for his return.

#Steelers LB TJ Watt suffered a torn pec muscle, but did not tear the tendon. That’s why, as he says, he’ll be back. It’s about six weeks of rehab, then Watt could be able to return — with no surgery. https://t.co/PJtnwu0bTS

The fans weren’t the only ones happy to hear the good news regarding TJ Watt. Steelers head coach Mike Tomlin shares that the coaching staff is “encouraged” by Watt’s injury update, per Jonathan Jones.

Mike Tomlin on TJ Watt: We're probably in a lot better place than we were after the game. I can definitively say that TJ won't play this week but I won't make any commitments beyond that. We're encouraged and we'll continue to gain opinions and do what's appropriate.

However, it was TJ Watt’s response to the news that has Steelers fans hyped. The guy basically plays like a Terminator so it makes sense why he chose this specific GIF. As long as Pittsburgh can remain competitive the next several weeks, Watt’s return could be massive in the back half of the regular season.

Don’t count out Pittsburgh just yet! Between TJ Watt’s injury update and Mike Tomlin’s uncanny ability to never finish below .500, Steelers fans are feeling more than confident about their chances this season.

Maybe another man-made ice bath will increase the healing time. We don’t know. We’re not doctors.

This is extremely optimistic but hey, TJ Watt is an absolute beast. So never say never.

and still win DPOY with ease 🥱🥱

We’ll see how the remainder of the season plays out. TJ Watt’s eventual return is massive for this franchise. If Mike Tomlin can get the offense rolling more efficiently, then the Steelers could be a dark horse out of the AFC North.