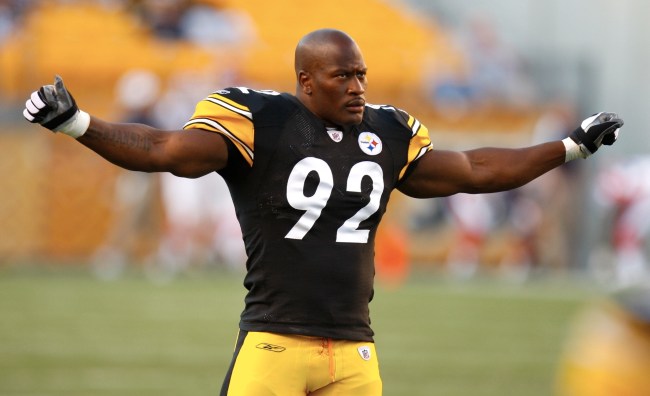 Last week, the Pittsburgh Steelers cut James Harrison after the veteran lineback voiced his frustrations about not getting much playing time this season.

The Steelers cut linebacker James Harrison on Saturday. They needed the roster spot to active offensive tackle Marcus Gilbert off the reserve/suspended list.

The franchise sack leader had seen his playing time diminish. He saw the field for only 40 defensive snaps in five games this season. He made one sack and three tackles.

Harrison complained about his lack of playing time earlier this month, saying he would not have re-signed with the Steelers if he had known he wouldn’t play.

Harrison’s former teammate Maurkice Pounce is not happy with the way Harrison handled the entire situation and blasted him during today’s media scrum.

James Harrison wanted out. It’s funny to read the stories. It’s something he wanted to do, It’s not like the team got together and we’re going to cut James. He’s gotta go and admit that.

If I wanted out, i wouldn’t let the the team to take the blame for it. I would tell you I don’t wanna be here. I want to be gone. I want to go and start somewhere else. That’s me as a man that’s what I would do I’m not going to run from it

#Steelers center Maurkice Pouncey says James Harrison wanted out of Pittsburgh and he needs to come out and admit it.

Pouncey just went off on Harrison's decision to go New England: "He erased his own legacy"

Maurkice Pouncey just went off on James Harrison. He said he forced his way out and ruined his Steelers legacy. Much more coming in a story

Pouncey wasn’t the only Steelers player to lash out at Harrison. Here is Bud Dupree firing shots at his former teammate.

Bud Dupree on Harrison: "I don't want the media to portray we're the reason he left…that ain't the reason. He chose to leave. He made certain decisions and his actions got him to this circumstance."

Harrison had clearly made it known to the organization that he was unhappy with his role with the team, I’m not sure what Pouncey and Dupree wanted him to do differently.