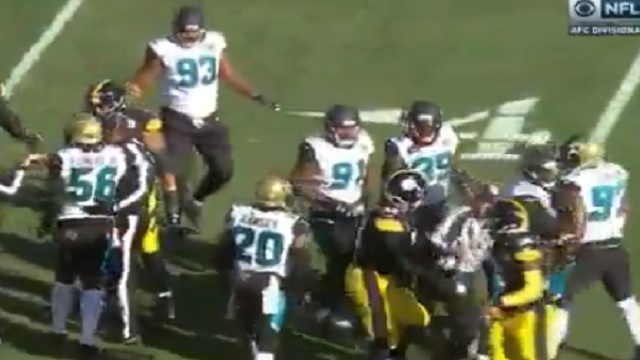 After last night’s terrible officiating job in the Pats-Titans game, NFL Twitter is extra vigilant today trying to catch the mistakes from refs. Early on in today’s Steelers-Jags game. Steelers offensive lineman Maurkice Pouncey appeared to shove a ref in the back while arguing with a Jags player.

Pouncey was not penalized for the play and NFL Twitter was irate about the missed call.

Center Maurkice Pouncey appears to shove an official after the Steelers fell short on a third-and-eight in the first quarter:

In that situation, players are typically ejected, since they’re not supposed to be putting their hands on officials. Marshawn Lynch was ejected for the same thing earlier this season against Kansas City.

Much like Lynch, however, it appeared that Pouncey didn’t realize it was an official that he was about to put his hands on.

So pouncey can push a ref but gabe can’t 🤔

Did Pouncey just make contact with a ref there or did I miss that?

Foreal tho, Pouncey literally shoved that ref and nothing. Tez barely touches one and he’s ejected

Seems like a pretty big call to miss early but it seems like refs are going to let some things slide in a playoff game because Pouncey would have clearly been ejected if this was a regular season game.