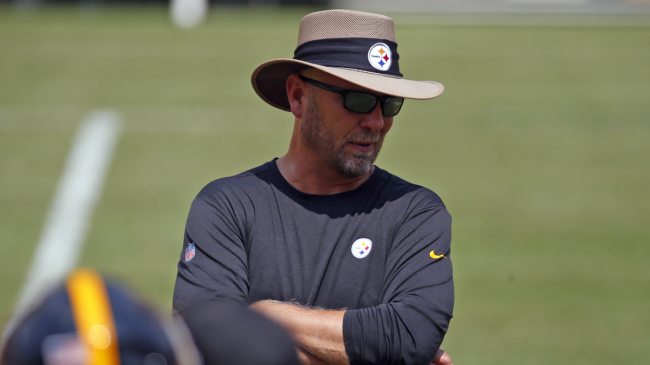 The Pittsburgh Steelers have not been a good offensive football team so far in the 2022 NFL season. Through three games, the squad has scored just four touchdowns, leading to a 1-2 record.

The team is averaging just 280 yards of offense, which has led to criticism.

Some of the frustrations of fans have been pushed onto quarterback Mitch Trubisky, but it seems that there’s a different tune being sung in the Steelers’ locker room.

According to Pittsburgh reporter Josh Rountree, many on the Steelers’ offense are growing aggravated with offensive coordinator Matt Canada.

After hearing a commentary from a number of Steelers, Rountree came to the conclusion that most wouldn’t be too upset to see the play caller go.

We’ve already heard reports claiming Canada doesn’t give Trubisky the option to audible out of plays. Now, it looks like a few others on the roster are speaking up about the lack of leadership on the offensive sidelines.

Wide receiver Chase Claypool said, “Umm, we got playmakers, but I don’t know if we have an identity. I think we’re still figuring that out,” when asked about the offensive struggles this season.

Offensive lineman Mason Cole shared that sentiment, replying, “For whatever reason, in the second half, we didn’t use [the up-tempo offense] as much,” when asked about a change in the gameplan last week versus Cleveland.

To Cole’s point, the Steelers scored 14 points in the first half against the Browns, which is the most they’ve scored on offense in a half all year. They were then held to three points the rest of the game.

The subtle jabs at the Pittsburgh coaching staff led Rountree to believe that players are unhappy with Matt Canada.

He would go as far as to say that they want him fired from the coaching staff, though he did clarify a bit on that statement after the fact.

To clarify this just a bit. No one has publicly come out and said that Canada should be fired. But there's a strong sense that the players are unhappy with the direction of offense, and, if polled, I believe would favor a change. #Steelers @937theFan https://t.co/l5CV0anQuJ

Tensions appear to be building in the Steel City. We’ll see what that means in for Canada moving forward.