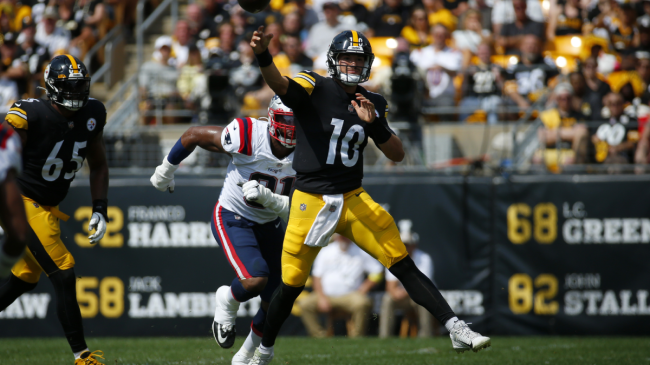 Tensions appear to be boiling over in Pittsburgh following two subpar offensive performances to begin the year.

The Steelers are averaging just 18.5 points per game, most recently scoring 14 in a loss to the Patriots. The offense has found the endzone only twice this year, which has led to criticism.

Most of that blame has been shouldered by quarterback Mitch Trubisky, who’s completing less than 60% of his passes and averaging 181 yards per outing. But some recent comments by the signal caller may suggest that blame should be shifted elsewhere.

Mitch Trubisky says his ability to audible is limited

Mitch Trubisky discussed some of the offensive woes that the Steelers have seen this season with the media. He made one comment that stuck out to reporters and fans.

Trubisky said that he doesn’t have the option to audible on every snap, which could hinder his ability to get the offense in the right play as it gets up to the line of scrimmage.

When asked about the freedom to change the play call before the snap, he said the following:

“Uh, not necessarily every play… We’re still figuring out when it’s a good time for me to audible.”

This seems to hint at the notion that offensive coordinator Matt Canada doesn’t quite trust Trubisky under center. The two are pairing up for the first time after the Steelers signed the passer over the offseason, but many said this is a trend that’s continued from last season.

Former quarterback Ben Roethlisberger said, himself, that he doesn’t believe Trubisky deserves the blame for the offensive struggles.

Maybe he believes Canada is handcuffing his new signal caller as he did his old.

A number of Steelers fans hopped on social media to comment on the situation that’s developing in Pittsburgh. Many couldn’t believe that a six-year veteran is not able to have full reign of the offense.

This fan noted that Canada has been stubborn with all of his quarterbacks in this aspect, while pointing out that the offense this season has looked better in two-minute drill than when huddling.

“There were reports Ben couldn’t audible so I 100000% believe Trubisky can’t… Offense always looks better going tempo (essentially when the OC is no longer calling every play). Says a lot.”

There was reports ben couldnt audible so I 100000% believe trubisky cant… offense always loos better going tempo (essentially when the OC is no longer calling every play). Says a lot.

This fan joked, “So a QB isn’t in charge of his offense. Makes sense. Seems like a guaranteed way to win and be successful.”

So a qb isn't in charge of his offense makes sense. Seems like a guaranteed way to win and be successful😁

“I see stuff like this & think, they don’t trust Mitch’s ability to read defenses & be able to audible to a better play,” wrote this NFL viewer, saying that it doesn’t seem like Canada trusts Trubisky to run the offense.

I see stuff like this & think, they don't trust Mitch's to reading defenses & be able to audible to a better play.

I’m not sure if it’s more of an indictment on Trubisky or stubbornness from Canada. Either way, things appear to be tense in the Steel City.