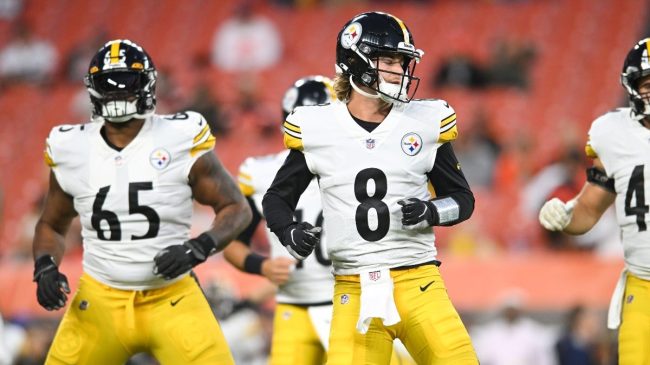 It’s been a rough go for Mitch Trubisky, as the Pittsburgh Steelers fanbase has been calling for Kenny Pickett’s name. Mike Tomlin has stuck true with giving the veteran quarterback a chance though, but it sounds like Week 4 was the final straw. Now, it appears Pickett is finally under center.

Early in the third quarter, Pittsburgh made the switch. Trubisky largely struggled throughout the first half against the New York Jets. The fans had seen enough before halftime, as they began chanting for Kenny Pickett to take the field. So, it appears as though Mike Tomlin has heard the Steelers fanbase and is giving the rookie quarterback a shot.

Kenny Pickett is in at QB for the @Steelers.

Additionally, Tomlin gave Pickett the opportunity to let it fly. However, it turns out that his first career pass attempt was an interception. Not the best start to his career, especially after the Steelers fanbase had been calling his number for multiple weeks now. Even so, one could put the blame on Chase Claypool, but at the end of the day, the interception stat belongs to Kenny Pickett.

Kenny Pickett goes deep on his first NFL attempt, but Jordan Whitehead comes down with the pick 🔒

Regardless of the outcome of his first career pass attempt, Pittsburgh seems content with the quarterback change. Especially considering he’s already scored his first career touchdown as well.

As long as Steelers fans are happy, they’ll cheer for Keny Pickett with no problem.

I can’t lie. This city and team needed Kenny Pickett in there

This is just the beginning for Kenny Pickett. We’ll see how his career pans out, but the Steelers were clearly ready for a change at quarterback.