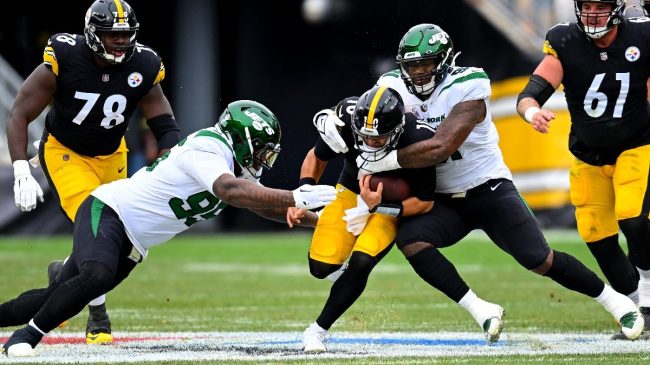 The New York Jets got off to an early lead against the Pittsburgh Steelers with Zach Wilson back under center. However, it has Pittsburgh fans unhappy with the play of their own quarterback, Mitch Trubisky. So much so, the entire fanbase is completely over the veteran and is calling for Kenny Pickett.

Maybe Zach Wilson doing the griddy is what triggered Steelers fans. Or perhaps it’s the fact Trubisky has been sacked and picked off already? Either way, the fanbase is absolutely tired of watching the veteran quarterback after watching Wilson and the Jets literally dance on them.

There are A LOT of tweets just like this.

At this point, it’s hard to argue with the fans.

The Steelers are wasting their time with the Mitchell Trubisky experience. Put Kenny Pickett in.

The chants have actually been pretty loud in the stadium too.

Do you want to know how bad the #Steelers are? We are losing to the #Jets. The JETS.

Those #Kennypickett Chants better be so loud that I should hear them 15 miles away in Brackenridge from @AcrisureStadium . #HereWeGo #SteelersNation #NYJvsPIT

We’ll see how it plays out. Although Steelers fans are ready for a change at quarterback, it’s hard to believe Kenny Pickett fixes all of the issues. The offensive line is atrocious, which would be troubling for any quarterback in the league. Even so, Mike Tomline might have to pull the switcheroo sooner, rather than later.